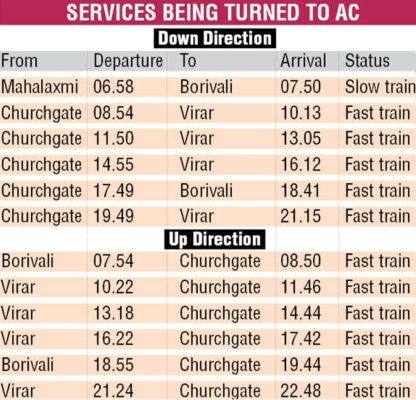 The Western Railway (WR) braces for a challenging first day of 2018 as it is the D-Day to operate the newly inaugurated air-conditioned local train up to Virar. On Sunday, WR officials were busy with the final checks of the AC locals as beginning Monday, the local will run for 60 kms.

Over the past two days, the WR carried out basic maintenance checks and inspection in the AC rake. “Primary checks were carried out. The AC train will run on the Churchgate-Virar route as scheduled,” said Ravindra Bhakar, Chief PRO, Western Railway.

After its launch on December 25, up to December 29, the AC local ran six services daily which will be upped to 12 services from January 1. Of these, eight services will run the Churchgate-Virar stretch and the remaining on the Churchgate-Borivali route.

As per the decided schedule for the AC local, authorities will operate one service each during the morning and evening peak hours.

Initial runs from the last week have mostly received negative feedback from commuters owing to the high fares, while some are of the opinion that the AC local is eating into the regular train services.

“By replacing the existing local train services on the Churchgate-Borivali route with the AC train, almost 50,000 people have been affected,” said passenger activist Anil Galgali.

Authorities are even more concerned about reactions once the AC local runs up to Virar.

“The Railways should have at least lowered the fares. Who will spend Rs 205 one way from Virar to Churchgate when a second class season pass can be bought in almost the same amount,” said A Parab, a resident of Virar.