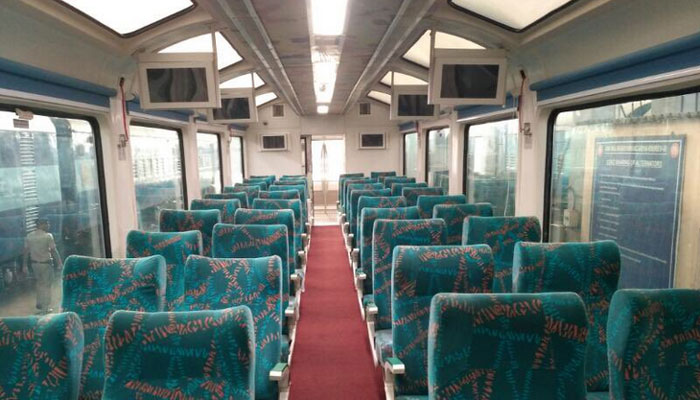 Visakhapatnam: Train journey to the picturesque Araku valley will be an even more delightful travelling experience as the Indian Railways has introduced a see-through Vistadome coach on its Visakhapatnam-Kirandul passenger train.

Railway Minister Suresh Prabhu flagged-off the train through a video link from Bhubaneswar.

The specially-designed Vistadome air-conditioned coach, claimed to be a first-of-its-kind on Indian Railways, has large glass windows and an observation lounge that offer passengers a panoramic view of the sites along the 128-km rail route from Visakhapatnam to Araku valley hill station.

A unique feature of this Rs 3.38 crore 40-seat coach is the double-wide reclining passenger seats that could be rotated 360 degrees for a better sightseeing experience.

The coach also has a glass-domed ceiling, automatic sliding doors and a multi-tier luggage rack, a railway release said.

The tourists can now sit relaxed in their seats and get a clear view of the breath-taking Anantagiri ghat section, Lambasingi, Borra caves and the tunnels along the route, from the Vistadome coach, unlike the crammed train compartments.

The Railway minister has shared some pictures of the coach via twitter: