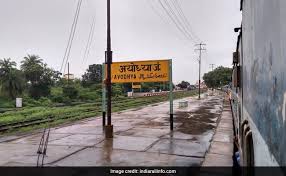 Railway Minister Piyush Goyal today said the railways is planning to build Ayodhya station on the model of a temple to connect people to Lord Ram’s birthplace and there was nothing objectionable if its design was the one conceptualised by the VHP for the Ram Janmabhoomi temple .

Responding to a question on reports of railways’ junior minister Manoj Sinha’s comments on Tuesday in Ayodhya, where he said that the railway station would be built as a replica of the Ram temple, Mr Goyal did not deny the plan but said the design was yet to be finalised.

He said that the idea was conceptualised by him to link railway stations with the history of the place.

Giving an example, he mentioned he had recently instructed that the entrance of Belagavi Railway Station in Karnataka be built like the Sabarmati Ashram in Gujarat. It was in the memory of Mahatma Gandhi who had used the same station when he came to attend the All India Congress convention held in 1924, Mr Goyal said.

When asked if the design of the Ayodhya station was a replica of a temple was the same as the one conceptualised by the VHP, Mr Goyal said, “Even if that is so, the Vishwa Hindu Prishad is a nationalist organisation and I don’t see anything objectionable in it. However, we have not yet decided on that yet.”