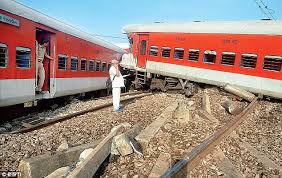 In the aftermath of the derailment of Utkal Express which claimed almost 23 lives, the railway administration on Wednesday sacked thirteen employees.

Fourteen coaches of the Puri-Haridwar Kalinga Utkal Express derailed at Khatauli near Muzaffarnagar in western Uttar Pradesh on the evening of August 19, killing over 20 people and injuring at least 200.