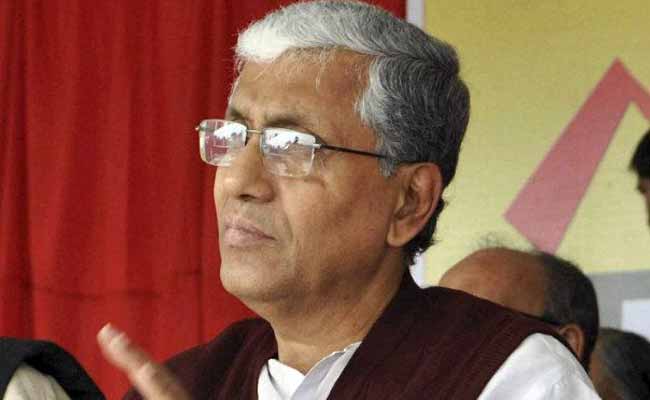 BJP workers today protested outside Chief Minister Manik Sarkar’s residence in Tripura’s capital Agartala over an indefinite road and railway blockade by the Indigenous People’s Front Tripura or IPFT, an organisation that is seeking a separate state.
The blockade to demand a separate state by carving out the Tripura Tribal Areas Autonomous District Council area entered the ninth day today. The prices of essential goods have risen due to the blockade.

“We have surrounded his residence due to his and his government’s failure to withdraw the national highway blockade by the IPFT. Our protest will continue unless the blockade is withdrawn,” Tripura BJP President Biplab Deb said. The chief minister, who also holds the home portfolio, is not paying attention to the problems of the people, Mr Deb said.

“Law and order is a state subject and it is his government’s duty to give relief to the people from inconveniences,” he told reporters. He said BJP leaders will meet Governor Tathagata Roy today and demand President’s rule in the state.

The opposition Congress has called a dawn-to-dusk strike in Tripura tomorrow, alleging the government’s failure to withdraw the blockade called by the IPFT.

“We oppose the demand of separate state and the indefinite blockade. We also oppose the silence of the government about the blockade, which is creating inconvenience to common people,” Tripura Congress President Birajit Sinha told reporters.

In a statement yesterday, the state government said Union Minister of State for Home Kiren Rijiju told the chief minister he would meet a delegation of the IPFT in Delhi over the blockade.

However, the BJP’s observer for Tripura, Sunil Deodhar, said he spoke with Home Minister Rajnath Singh and Mr Rijiju, and both made it clear that talks would be possible only after the blockade is withdrawn.