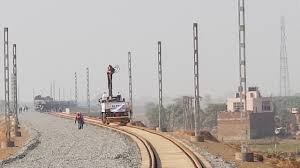 The DFCCIL on Tuesday said it had successfully conducted the trial run on the 190-km Ateli-Phulera section of the Western Dedicated Freight Corridor at a maximum speed of 100 kmph in less than four hours.

“Dedicated Freight Corridor Corporation India Ltd. (DFCCIL) achieved a historic feet by successfully completing the trial run on its western corridor for the first time,” it said in a release.

According to the DFFCIL, the trial run of the Railways locomotive was conducted from Ateli in Haryana’s Mahendragarh district to Phulera in Rajasthan’s Jaipur district during the day.

“The locomotive covered 190 km in 3 hours and 52 minutes and touched a maximum speed of 100 kmph,” it said. The section has over 10 viaducts and major bridges, 127 minor bridges, one rail flyover and 118 under-bridges.

The 3,373-km DFC, a flagship project of the Railways, aims to augment rail transport capacity to meet the growing requirement of movement of goods by segregating freight from passenger traffic. The Eastern Corridor of the DFC runs from Ludhiana to Dankuni (1856 Kms) and the Western Corridor from Dadri to Jawahar Lal Nehru Port, Mumbai (1504 Kms).

The Western DFC runs from Jawaharlal Nehru Port in Mumbai to Tughlakabad and Dadri near Delhi, and aims to cater largely to the container transport requirements between the existing and emerging ports in Maharashtra and Gujarat and the northern hinterland.

The 1,839 km Eastern DFC runs from Ludhiana in Punjab to Dankuni near Kolkata — to be extended in future to serve the new deep-sea port proposed in the Kolkata area, and will largely handle coal and steel traffic.

The DFCCIL plans to run freight trains at a maximum speed of 100 kmph as against the current 75 kmph. It also plans to increase the average speed of freight trains from the existing 26 kmph to 70 kmph on the DFC.