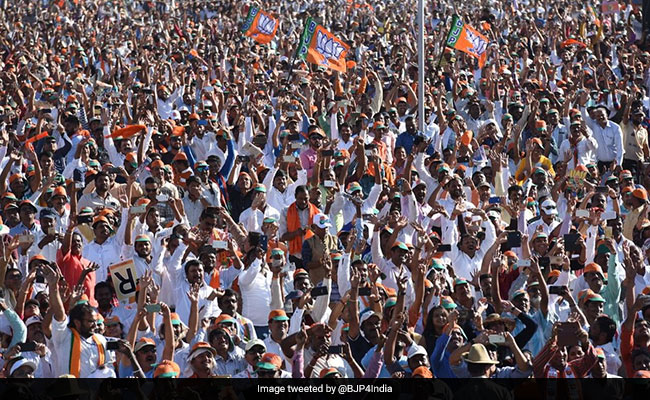 Prime Minister Narendra Modi on Sunday said there has been a 180 per cent increase in the allocation for Karnataka after the BJP-led NDA government came to power in the centre. The money, however, has not been passed on by the state’s Congress government, he said. He also outlined the party’s plan for the state, which includes a suburban railway for Bengaluru, bonanza for farmers and reiterated Union finance minister Arun Jaitley’s budget promise of putting men in hawai chappals (slippers)  in haiwai jahaaj (airplanes).

“When the Congress was there in the centre, Karnataka was given Rs. 73,000 crore. When the BJP came to power in the centre, we gave the state 2 lakh crore. It is an increase of 180 per cent. However, have you seen that money given to the state?” he said.

He also blamed the Congress for murders of volunteers of the BJP. “With the Congress government in the state, what makes the news is ‘ease of doing murder’,” he charged, pitting it against what he said was the BJP’s focus of improving “ease of living” and ease of doing business.

The Prime Minister also continued his pitch to the farmers, who have been one of the key focus areas in the recently announced Union budget. The BJP, he said, has given “TOP” priority to the farmers, he added, explaining, “by TOP, I mean Tomato, Onion, Potato”.

The focus, he indicated, was also evident in the party’s choice for the top job in the state — BS Yeddyurappa, who headed the earlier BJP government in the state.

“If farmer’s son Yeddurappa becomes the Chief Minister, the Centre’s MSP (minimum support price) scheme will be highly successful because he knows the problems of the farmers,” he said, referring to the government’s plan to set MSP at one-and-half times the cost of production.

Karnataka is the only state in south India, where the BJP came to power once. The party is going all-out to wrest power from the Congress in the assembly election that will be held later this year. Mr Yeddyurappa led the statewide Parivartana Rally, whose culmination was being addressed by PM Modi at Palace Grounds in the heart of the city.

The ruling Congress has dismissed the possibility of the rally influencing the voters. Senior state Congress leader Dinesh Gundu Rao said, “It was more an yatra of lies and deceit than any parivartana (progress)… they had no agenda or material to attack us. So all they were doing is spreading lies and creating disturbance.”