The inheritance of loss: Bengaluru is busy destroying architectural links to its past

Nov 25, 2017 Posted by Indian Railways Updates Indian Raliways News Comments Off on The inheritance of loss: Bengaluru is busy destroying architectural links to its past 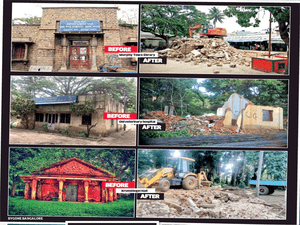 On Wednesday, the century-old Krumbiegel Hall in Lalbagh was reduced to a rubble by the Horticulture Department without prior consultation with either conservationists or the public whose culture scape it belonged to.

Even as politicians created a brouhaha over celebrating Tipu Sultan’s ‘jayanti’ earlier this month, the 18th-century ruler’s last-remaining armoury in Kalasipalyam continued to languish. In July, the heritage Murphy Town library was demolished to make way for the chief ..