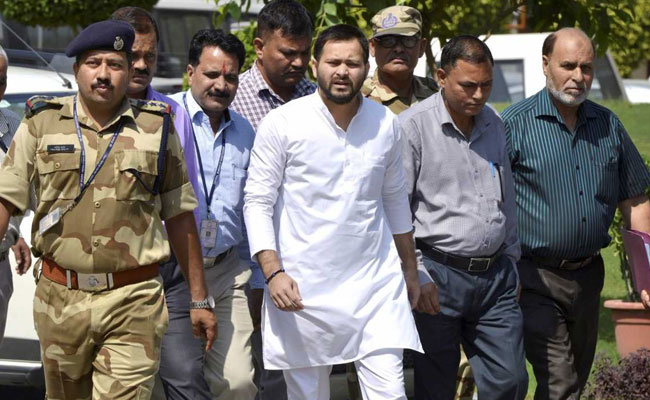 Tejashwi Yadav, son of RJD chief Lalu Prasad, was grilled for about nine hours by the Enforcement Directorate on Tuesday in connection with its money laundering probe in the railway hotels allotment corruption case.

The former Bihar deputy chief minister arrived at the central probe agency’s office in New Delhi at about 12 noon and left after 9 pm, officials said.

They said at least 40 questions were put across Tejashwi Yadav and that the investigating officer recorded his answers.

The agency is expected to record the statement of Tejashwi Yadav’s mother and former Bihar chief minister Rabri Devi on Wednesday.

The CBI had recently recorded the statement of Tejashwi and Lalu Prasad in the case.

The Enforcement Directorate had registered a criminal case against Lalu Prasad’s family members and others under provisions of the Prevention of Money Laundering Act (PMLA), sometime back.

It had earlier questioned a few people in this case, including the wife of former UPA minister P C Gupta.

The agency had taken cognisance of a CBI FIR in this regard to initiate its own criminal complaint.

In July, the Central Bureau of Investigation (CBI) had registered a criminal FIR and conducted multiple searches against Lalu Prasad and others.

The Enforcement Directorate will investigate the alleged “proceeds of crime” generated by the accused, purportedly through shell companies, officials had said.

Rabri Devi, Tejashwi Yadav, and others will be probed by the agency under charges filed in the Enforcement Case Information Report (ECIR), the ED equivalent of a police FIR.

The case dates back to the time when Lalu Yadav was the railway minister in the UPA government.

The FIR alleges that Lalu Prasad, as railway minister, handed over the maintenance of two IRCTC hotels to a company after receiving a bribe in the form of prime land in Patna through a ‘benami’ company owned by Sarla Gupta.

The FIR was registered on July 5 in connection with favours allegedly extended to Sujata Hotels in awarding a contract for the upkeep of hotels in Ranchi and Puri and receiving premium land as ‘quid pro quo’.

The Enforcement Directorate, under the PMLA, has powers to attach and confiscate tainted assets and it is expected that the agency will initiate such a move once it makes progress in the case.