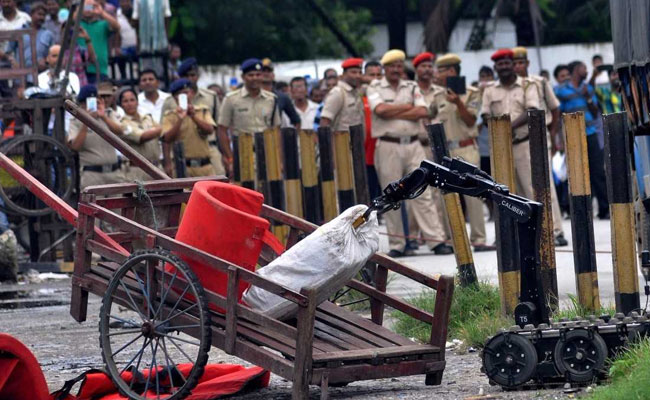 A suspicious object, suspected to be a bomb, was today recovered from a Silchar-bound parcel baggage in Guwahati railway station, GRP and police officials said.

A Home Guard on duty at the Railway Mail Service (RMS) area, behind platform number one, heard a ticking sound from the parcel baggage at around 9.45 am and immediately informed the Government Railway Police there, a GRP official told PTI.

The GRP then informed the police who arrived with a bomb disposal squad for removing the baggage to an isolated place, the official said.

Director General of Police Mukesh Sahay said it was not immediately known if the parcel contained a bomb. “The laid down drill for any suspicious object will be followed by isolating it and then finding out what it is,” Mr Sahay said.

“We will have to first detect whether it is a bomb. Only after that, will the question of who is involved will come in”, the DGP said.

On being asked as to why there was no CCTV in the RMS area, Sahay said, “Only the Railway authority can comment about it. It is good to have CCTV but nevertheless a security personnel detected it”.

Meanwhile, the suspicious object, weighing 10 kg, was taken safely in a special truck to an open uninhabited area of Rani on the outskirts of Guwahati, a bomb disposal official said.

The official suspected it to be a handmade improvised explosive device (IED) fitted with a programmable time device (PTD).

Urging photo journalists not to use camera flash while taking photos as it could trigger a blast, he said the object would be safely detonated with another IED.

The parcel sorting personnel at the RMS yard said, the baggage with many articles, had a GPO seal marked for Silchar in south Assam’s Barak Valley.

It was to be transported by truck as railway services were suspended for the last ten days due to floods.