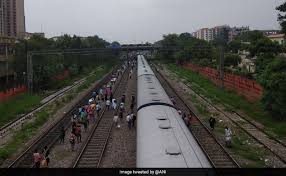 For travellers between Mumbai and Delhi, the Indian Railways has a good news:  new Super Rajdhani will be launched from October 16, which the Railways said, will reduce at least two hours of travelling time as compared to the usual Rajdhani that runs on this route. The train will not have a flexi fare system according to the dynamic pricing mechanism of the railways, the Ministry of Railways said, on its official Twitter account @RailMinIndia. This means that the fares of the train will not jump by 10 per cent over every 10 per cent of seat bookings as happens with usual Rajdhani trains.

The fares on the Super Rajdhani will cost passengers Rs. 600-800 less than the two other Rajdhanis already on the route, according to a report by news agency Press Trust of India.  The train will chug-off from Delhi on Wednesdays, Fridays and Saturdays and from Bandra on Tuesdays, Thursdays and Saturdays.

To fulfil the long-overdue demand of passengers and to provide faster and convenient connectivity to passengers between two metros, Delhi and Mumbai, Indian Railways introduced the new Special Rajdhani Express between Delhi and Mumbai from October 16, the Ministry of Railways said in a statement.

The ministry also said that the train would be introduced on an experimental basis for three months to gauge the response of the public to the concept of a flat increase in fares against the existing flexi-fare system.

Railways said that with the introduction of the new Rajdhani Express, the travel time will be reduced from about 15 hours, 50 minutes to 13 hours, 55 minutes. The train will stop at Kota, Vadodara, and Surat only. Railway officials said that to increase the maximum speed of the train to 130 km/h, it will be hauled by two WAP5 locomotives of 5,400 horsepower each. The transporter already runs two Rajdhanis and more than 30 mail or express trains between the two metro cities.

The Rajdhani Express will comprise one first AC, two 2AC, 12 3ACs, and one pantry car. The fares of the new special train would be 20 percent more than the base fares for the existing New Delhi-Mumbai Rajdhani without any flexi fare. The fare for the special Rajdhani in 3rd AC and 2nd AC will be around 19 percent cheaper than the maximum flexi fare of 3rd AC in the Mumbai Rajdhani.

The Special Rajdhani Express will depart from Hazrat Nizamuddin on Wednesdays, Fridays, and Sundays at 4:15 pm, reaching Bandra Terminus at 6:10 am. It will leave Bandra Terminus on Tuesdays, Thursdays, and Saturdays at 4:15 pm and reach Hazrat Nizamuddin at 6:10 am. On September 9, 2016, Railways introduced flexi fares for premier trains — Rajdhani, Duronto, and Shatabdi.

Under this, the base fare increases by 10 percent with every 10 percent of berths sold, subject to a prescribed limit. There was no change in the existing fare for 1AC and EC class of travel. But on December 19, Railways started to provide 10 percent rebate on any seat left vacant after the preparation of the chart.