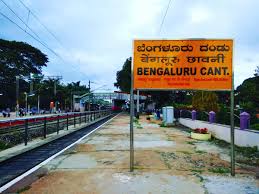 The railways has planned an exclusive terminal for suburban rail service in the Cantonment station premises. “We will be making a proposal to the Railway Board,” said Divisional Railway Manager R.S.Saxena, confirming the development.

If the Board too favours it, the ministry will include the project in its next year’s budget and chalk out plans on its implementation, including the model and funding.

Bengaluru lacks a suburban terminal like the one at Churchgate in Mumbai, which has helped the government address transportation needs of a large number of Mumbaikars. “We have the land near the Bamboo Bazaar area. We only need to build a terminal like Churchgate in Mumbai,” a railway official said. The railways has plans to connect the proposed metro lane with the suburban terminal through a skywalk or subway later.

The railways wants to run suburban trains from here to several places including Nelamangala, Mandya, Marikuppam, Tumakuru, Hosur and Gowribidanur. This will also provide critical connectivity to software suburbs like Sarjapur (Carmelaram station) and Electronic City (Heelalige station) which comes on the Hosur section and to Whitefield which comes on the Malur sector, besides airport as well.

The railway officials have asked for 10 acres of land owned by Binny Mills and have been pursuing it with the Infrastructure Development Department. If this piece of land is acquired and given to them, they would shift maintenance infrastructure such as pit-lines and stabling lines to the new site and expand the city railway station with two dedicated platforms to run suburban train service.

“We cannot currently run a service to or from the city railway station in view of the congestion. We cannot think of running a service from Kengeri to Cantonment and beyond because platforms are not available,” the official said. The railways, he added, is already running 100 suburban services a day and once they create the infrastructure, additional rakes and new services will follow.

The railway officials in Bengaluru, however, maintained that the suburban services fall in the domain of the state government and the railways could do its bit only with the help of the state.

The suburban rail policy requires both the state and the Railway Ministry to form a special purpose vehicle (SPV) with equity participation of 20% each. The SPV is required to arrange the balance cost of the project through debt or other sources while the state government has to provide guarantee for the loans. In a recent letter, Bengaluru Central MP PC Mohan (BJP) has offered to provide funds from his local area development (MPLAD) fund to upgrade the infrastructure at the Cantonment railway station to run suburban train services.