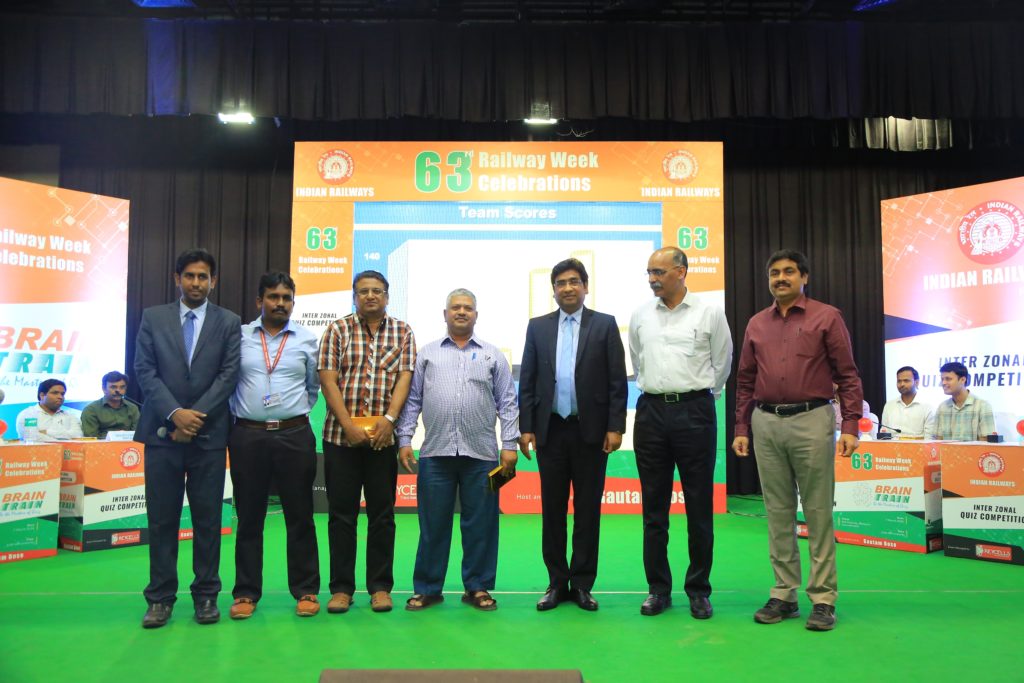 The All India Inter-Zonal Quiz Competition to mark the 63 rd Railway Week Celebrations of Indian Railways was held today i.e., 7 th March,2018 at Rail Kalarang, Secunderabad. The first ever such event on Indian Railways was conducted by South Central Railway.

The Quiz Competition saw participation of 16 teams representing various Zones and production units of Indian Railways, including the host South Central Railway. The day long Quiz Competition which comprised of a preliminary round involving all teams followed by two semi- finals of 6 teams each and the finals comprising of the top 6 teams which qualified in the Semi-finals.

The internationally acclaimed Quiz Master, Mr. Gautam Bose conducted the entire competition, which built up tempo at each stage, reaching the climax in the tough finals. Southern Railway, represented by the 3 member team of Shri P.V.Manoj , Shri P.R.Girish Kumar and Shri R.Ramachandran were the winners , followed by the North Eastern Railway team of Shri Jagadamba Prasad, Shri Shashwad Gupta and Shri Sanat Jain as the runners up.

Addressing the huge gathering of Officers and Staff of Railways besides the Quiz lovers from the city present at the Competition, the General Manager stated that Indian Railways has for the first time, decided to organize competition in Cultural events, Painting, Photography and Quiz for the Indian Railway Workforce, on the eve of the 63 rd Railway Week Celebrations to be held in April,2018. While the other Competitions have been entrusted to 3 other Zones, the All India Quiz Competition was tasked for South Central Railway to conduct. The tough level of competition and equally exciting rounds of the Quiz, showed the knowledge skills of Railway Employees, who are amongst the best. Shri Vinod Kumar Yadav added that these events are meant to develop a sense of team spirit amongst Railway Employees and enhance their competence levels so as to enable them perform to their best.

Earlier, Shri M.Umashankar Kumar, Chief Public Relations Officer, SCR welcomed the gathering and detailed the format of the tournament. The winners and runners up team will be felicitated at the main National Level function to mark the 63 rd Railway Week Celebrations of Indian Railways being held at Bhopal on 11 th April,2018. The other four finalists will be awarded at the regional function of the Railway Week Celebrations to be held at Secunderabad, also in April,
2018.

The Quiz Master Shri Gautam Bose expressed his happiness at the high levels of knowledge and intelligence of all the players representing the participating teams, which made the competition exciting and tough.