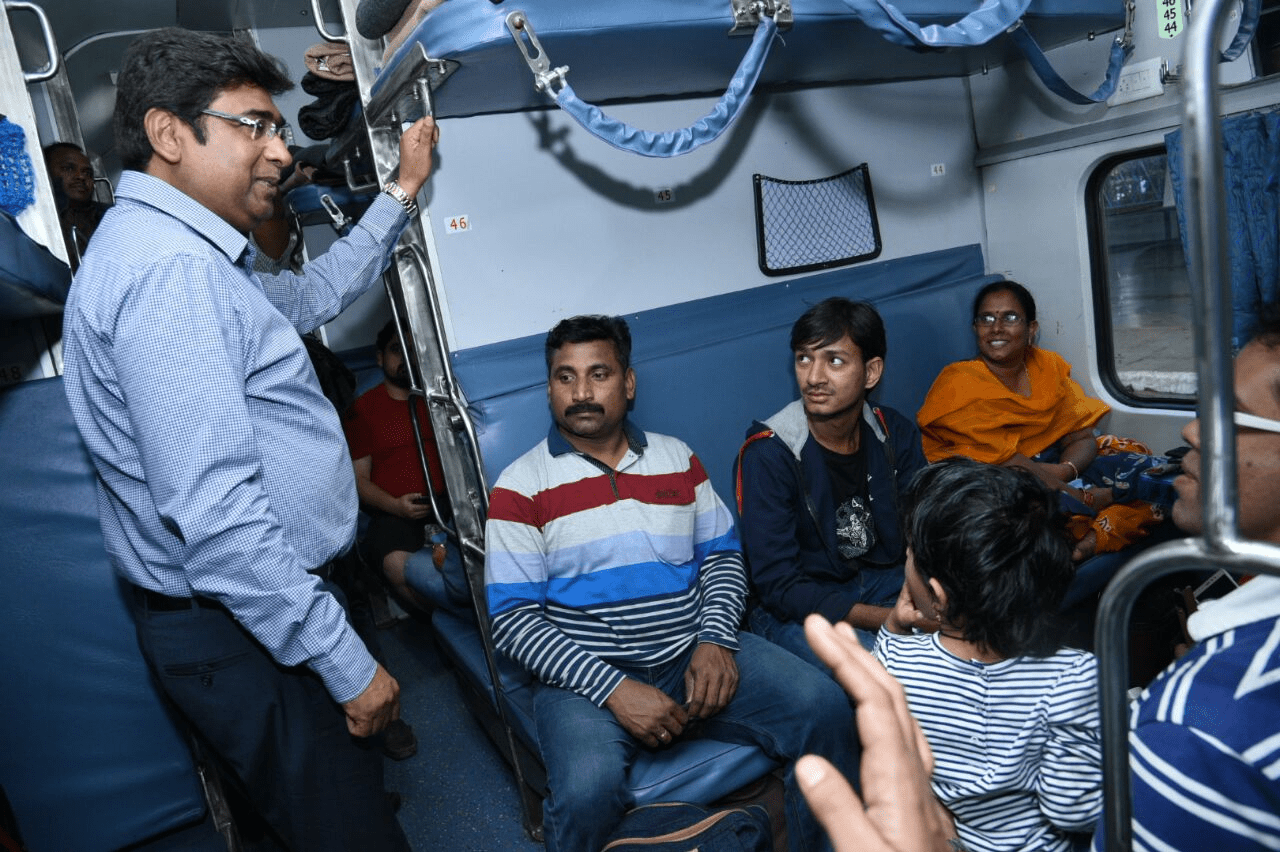 The spirit of Sankranti, the harvest festival in the two Telugu states of Andhra Pradesh and Telangana, which sees a huge flow of people travelling to their native places from the urban centers, drew the best out of South Central Railway. Rising to the challenge of passenger demands on its network during the Sankranti vacations, SCR has been successfully implementing a well planned strategy to cater to the rush of rail users, transporting them to their destinations without inconvenience. The entire plan is being implemented from 1st to 20th January, 2018 which will see people travelling between various destinations, since the Sankranti vacations fall in that duration.

Shri Vinod Kumar Yadav, General Manager, South Central Railway held several meetings with senior officials of the Zone involved in train operations and instructed them to run as many number of special trains as possible, in addition to strengthening of all other passenger need based utility services, so as to make travel comfortable. Besides intensively monitoring the passenger traffic pattern on a day to day basis, the General Manager himself visited Secunderabad and Kacheguda Railway stations in Hyderabad city yesterday i.e., 13th January, 2018 during the peak rush hours in the evening to personally monitor the arrangements and interact with passengers to seek their suggestions and response. Shri Vinod Kumar Yadav has also directed the Divisional Railway Managers and Additional Divisional Railway Managers of the Divisions to continuously keep a check on the traffic requirements and monitor the situation extensively.

The general pattern of extra rush of passenger traffic during Sankranti season concerns people from Hyderabad city visiting their home towns, mostly in coastal Andhra Pradesh belt, besides other parts of Andhra Pradesh and Telangana. The rush also soars between the urban centers and pilgrim destinations, particularly Tirupati and Shirdi. Yet another demand during the same period pertains to the Sabarimalai bound Ayyappa pilgrim traffic, which also peaks on these festival dates. Accordingly, SCR devises its plan to run special trains for Sankranti and Sabarimalai season, in advance. However, during the current year, the General Manager personally involved in the task and wanted a dynamic approach to handle traffic needs by means of continuously analyzing passenger traffic trends on the Zone and running special trains at the shortest notice. Going a step further, he also put the officials on the task to ensure that all the sections of rail users are catered to, so that there are no complaints from any quarter, particularly those who opt to travel in general second class at the last moment.

SCR handles around 10.2 lakh passengers on each normal day. The figures rose by around 60, 000 more passengers each day between 1st to 14th January, 2018 which signifies the huge additional demand on the rail network in the Zone during Sankranti. It is expected that the total additional passenger traffic catered during Sankranti season by SCR, between 1st to 20th January, 2018 will touch a figure of 12 lakhs. The high point is that the three major rail terminals in Hyderabad city i.e., Secunderabad, Kacheguda and Hyderabad have seen a big surge in passenger footfall in last three days from 10th to 13thJanuary 2018. These three stations, which normally handle 75,000 outstation bound passengers each day, have registered a significant increase of passenger traffic by around 50%, with the passenger outflow touching around 1.10 lakh each day.

1) Special Trains: 147 Special Trains are being run for Sankranti season through which around 1.5 lakh additional berths have been generated. This comes as over 50 more special trains compared to the number of special trains operated last year. The Sankranti special trains are being run on popular and high demand routes, including between Hyderabad city and Visakhapatnam, Kakinada, Vijayawada, Guntur, Machilipatnam, Nellore, Renigunta etc., besides between Nanded – Tirupati, Nagarsol – Tirupati, Adilabad – Tirupati, Tirupati-Visakhapatnam, Tirupati-Kakinada etc.

The highlight of these services is the running of exclusively general second class accommodation special Jansadharan Express trains between Secunderabad and Kakinada, to meet the last hour rush of passengers who intend to travel in second class without advance reservation, by far the cheapest mode of travel option during the festive season.

2)  Additional coaches in regular trains: Apart from Special Trains, SCR has come out with an innovative plan to closely monitor passenger traffic in various sectors and in different classes. Basing on the same, regular trains are being augmented with extra coaches in various classes, so as to carry additional number of passengers by these trains, who are booked in the waiting list. During the period from 1st to 13th January 2018, 195 extra coaches have been attached to several popular trains like Goutami Express, Narsapur Express, Simhapuri Express Visakha Express, Venkatadri Express and Bangalore Express etc, benefiting an additional of 11,000 passengers.

3)         Other Measures: With the onus of meeting a 50 % increase in passenger traffic during the peak festival days, SCR also undertook various other measures to ensure convenience and comfort to passengers. The initiatives include –

Operation of additional ticket booking counters by deploying staff in required numbers besides utilizing the Automatic Ticket Vending Machines (ATVMs) on the Platforms in a big way, by means of ensuring the presence of ATVM facilitators.
Strengthening of Enquiry counters has been done by posting more number of staff. Frequency of public information related announcements has been substantially increased, so as to keep the passengers well informed on their requirements.
Officers and Senior Supervisors have been deputed to camp at various major railway stations round the clock and closely monitor the passenger traffic flow and take on spot decisions to ease their travel.
Ticket checking staff has been booked to extensively check the trains at stations and on trains, so that genuine passengers are not put to trouble and the possibility of revenue leakage is also plugged.
In order to ensure smooth movement of passengers on platforms at Secunderabad, Hyderabad, Kacheguda, Vijayawada Railway stations which see a huge rush, the platform ticket fares have been temporarily enhanced from Rs. 10/- to Rs. 20/-, so as to discourage avoidable rush of people on platforms who come to send off those doing journey.
Catering arrangements have been suitably increased to meet the needs of rail users and inspections are being conducted by Railway officials to curb overcharging of eatables and beverages besides ensuring cleanliness and quality at the catering stalls.
With the increase in traffic and the resultant impact on cleanliness in Trains and at Railway stations, steps have been taken to strengthen the On Board Housekeeping Services (OBHS) for Train cleanliness and round the clock mechanized cleaning at Railway Stations.
Security Measures have been tightened with the deployment of additional Security staff, both from Railway Protection Force (RPF) and Government Railway Police (GRP) at Railway stations and on trains, to control and regulate the huge crowds wherever needed. Round the clock monitoring at Stations is being done by Close Circuit Television Cameras (CCTVs) Surveillance.
Sankranthi Special Trains from Kakinada Town to Secunderabad & Narsapur to Hyderabad

In order to clear extra rush of passengers during Sankranthi festive season, SCR will run two Special Trains viz., one Suvidha special train from Kakinada Town to Secunderabad and one special train from Narsapur to Hyderabad as detailed below:-

The General Manager Shri Vinod Kumar Yadav has directed that the entire plan to handle the rush of Sankranti festive traffic shall continue until the return direction passenger demand which is expected to peak in the next 3-4 days, is fulfilled.