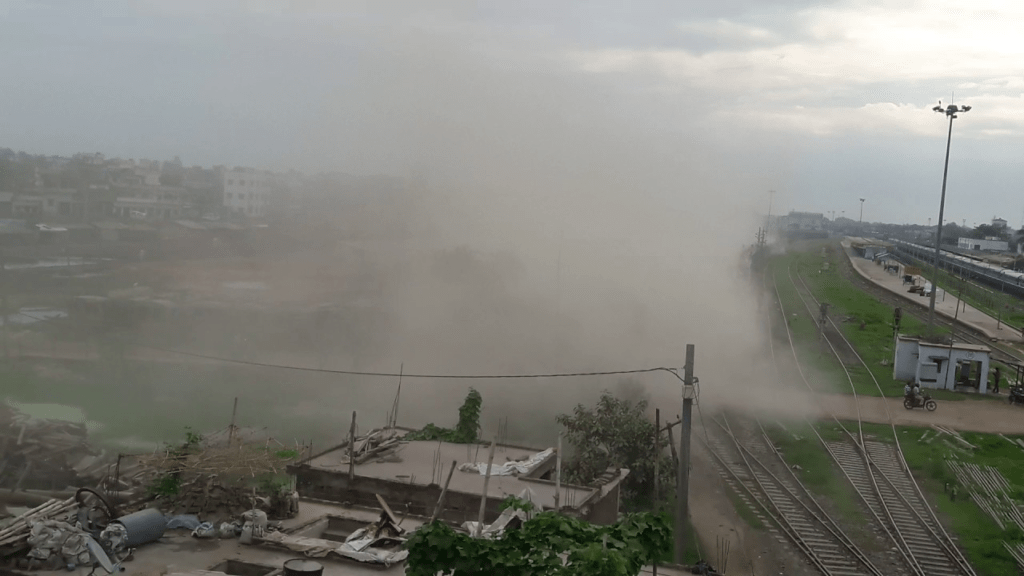 Nepal may have to pay the price for a mistake it did not commit, as locals of the Indian town right across from Birgunj have issued warnings that they will prevent Nepal-bound cargo vehicles from passing through their locality if concerned Indian authorities do not address their problem.

Locals of the Indian town of Raxaul have long been saying that improper management of cargoes of clinker, a key raw material used in the production of cement, has caused a rise in air pollution, posing severe health risks. If this problem is not resolved by December 25, locals claim that they will halt movement of vehicles on the Indian national highway.

Most of Nepal’s imports are channelled through Raxaul, which also serves as the final transit point for vehicles ferrying goods to Nepal. A disruption to the movement of cargo vehicles in this town will a trigger shortage of petroleum products, raw materials and other essentials in Nepal. It is, therefore, essential that concerned Indian authorities hold dialogues with locals and address their demands.

Locals have been reckless in the handling of Nepal-bound clinker cargoes that arrive at the railway station from Indian states such as Jharkhand and Odisha. The haphazard handling of consignments has filled the town’s air with clinker dust.

Clinker dust is harmful for health. If this issue is not solved immediately, residents of Raxaul will continue to develop allergies and respiratory problems. So, Indian authorities must act fast before the slow poison starts killing people.

Earlier, the High Court in Patna had also directed the Indian government to immediately control pollution in Raxaul. Following this, the Indian Railways had started building another station for the transportation of clinker. But locals of the area where the new station is being built have said they will not allow their town to be turned into a clinker clearing house. Their concerns are genuine and the Indian government should not coerce people to compromise on health related issues.

Yet the Indian government should not turn a blind eye to concerns of Nepal as well, which relies on India for almost all of its imports. If the protest is allowed to go on, Nepal will definitely face supply disruptions, which will trigger shortage of goods, thus allowing black markets to flourish and build inflationary pressure.

Clinker imports have gone up in Nepal due to a jump in demand for cement, as post-earthquake reconstruction works and other construction activities have started gathering pace. But Nepal will not have to rely on Indian clinker forever because the country has a huge deposit of limestone. Lately, foreign companies have started eyeing these deposits and are investing in Nepal to extract the mineral. Also, domestic cement factories have started producing clinker.

But until the time Nepal becomes self-sufficient in clinker production, it will have to rely on India. So India should make necessary arrangements to ensure uninterrupted flow of clinker to Nepal, while containing the health hazards created by movement of the raw material in the bordering Indian town.

The Samastipur Divisional Railway authorities says that the railway which has a depot and rack point for dumping material like coal, cement and clinker which is shipped to Nepal at Raxaul Railway Station is in the process of shifting the rack point to village Ramgarhwa which is 12 kilometers from the site.

Since the material involved is coal, cement and clinker enroute to Nepal it leads to air pollution by increasing the suspended particulate matter in the ambient air, say environmental experts. This can lead to lung related infections in the individuals who live near the area, they add.

Now the residents of Ramgarhwa will face a similar fate if the rack point is shifted from Raxual to Ramgarhwa says Chowdhary the principal of the Ramgarhwa High School.

In view of the fact that several people reside in the area of Ramgarhwa railway station and it is densely populated, Chowdhary says that the Rack Point should be shifted to Masladih Railway Station which is half way between Raxaul and Ramgarhwa and where there is hardly any population. This way the Railway will be able to shift the rack point and the people of Ramgarhwa will not be inconvenienced, says Chowdhary.

Clinker has turned out to be a major cause of respiratory disorder for residents of this India-Nepal border town.

The stony residue from burnt coal or from a furnace consists of inferior limestone that contains rich volume of silicon dioxide, which is very harmful for lungs.

Clinker is used as raw material in cement-manufacturing units and the dust-like component is stored in Raxaul, around 210km north of Patna. The clinker is usually transported from Madhya Pradesh, which is supplied to nearly two dozen cement factories in Nepal.

Confirming the adverse impact of clinker on human body, physician Mahendra Singh said he knew at least two of his patients Ashok Bajaj (57) and Dhruv Prasad (50) who died of lung cancer because of infection caused by clinker dust that fills the Raxaul air.

The Duncan Hospital, a Christian missionary-run health facility, in its report submitted to the local administration confirmed the impact of the raw material on human health.

The report stated that more than half of Raxaul’s population was suffering from different kinds of lung and eye diseases caused by clinker. The population of the sub-divisional town of East Champaran district is around 1.25 lakh.

Another doctor in the town Prashant Kumar said the harmful clinker dust gets mixed in the air at the time of unloading and loading of the raw material.

The unloading is done when the raw material reaches the town by train from the mines of Madhya Pradesh. This raw material is then loaded in vehicles heading to the cement factories in Nepal.

Alarmed over the impact of this stony material on human health, Raxaul resident Mahesh Agrawal filed a writ petition in Patna High Court seeking its intervention on the issue. The matter, said Agrawal’s counsel Gautam Keriwal, has not yet been listed for hearing in the court.

The petitioner has made railway officials as well as those from the state pollution control board party in the case.

Throwing light on the problem, college teacher Anil Sinha, who has been actively raising issues concerning residents of Raxaul, said the situation was not that alarming around 15 years back when the clinker dumped near Raxaul railway station was transported to Nepal within 24 hours but things deteriorated and at present the stock remains dumped outside the Raxaul railway station at least for a week after its arrival.

Railway sources said more than 60 rakes of clinker reach Raxaul every month and the raw material is stored in the open near the railway station.

Though railways has assured corrective steps to make the town free of the problems caused by clinker dust, till date nothing substantial has been done to fulfil the promise.

The then Railway Minister Suresh Prabhu, in a letter sent to local MP Sanjay Jaiswal, who had drawn the attention of the problem, had made the promise. Concerned over the failure of the railway ministry, teacher Sinha said residents will resort to agitation to draw the attention of authorities towards the problem which was taking a toll on the health of the residents.