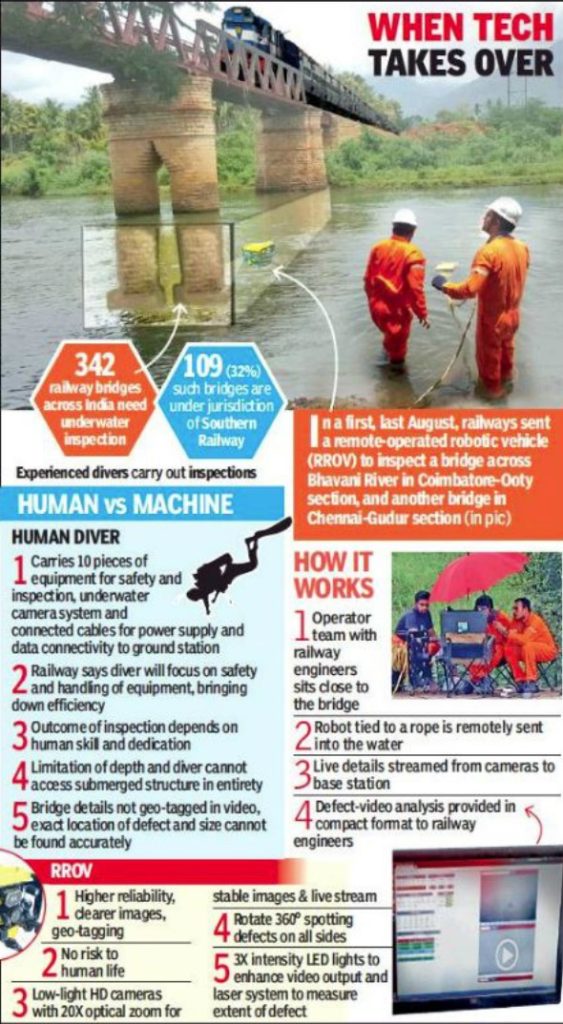 Even as railwaymen resist induction of technology fearing job losses, the Indian Railways has quietly inducted a homegrown robot to better a job hitherto done by humans by risking their lives.

Southern Railway has tied up with a company, incubated by IIT-Madras, that has made a remote-operated robotic vehicle (RROV) which inspects the submerged portions of railway bridges traversing waterbodies. This yellow device is equipped with HD cameras and geo-tagging allowing railway officials identify exact location of defects from their offices. The cameras can also relay the feed from turbid and saline waters.

Lauding the effort, the railway board in a meeting last December directed other zones to replicate the model. Officials have planned to use this technology in Delhi under the Yamuna bridge where the water is turbid. There are 342 bridges across the country which need underwater inspection; 109 of them are in Kerala and Tamil Nadu and under the jurisdiction of Southern Railway. These bridges need a maintenance check every five years.

Earlier, underwater inspection was done by divers, both in-house and contracted. While some of these divers have retired, railway has plans to phase out the process. “They were strapped with 10 vital equipments for their personal safety and inspection, including a camera. The video quality was not good and the exact location of the defect could not be ascertained. The maintenance planned would differ based on the inspection notes which were not consistent across divers,” said a senior railway official.

The underwater piers are at a depth of 10m-25m. The difficulty of inspection and danger to the diver increase with depth. But depth will not affect the RROV, developed by Planys Technologies. It can be lowered till 200m. Southern Railway has used it to check two bridges on the Coimbatore-Ooty and Chennai-Gudur sections in August.

The robot can move 360° across the pier at any depth, not possible during human inspection. Once the robot is tied to a rope, it will be sent under water controlled by a team, that includes a railway engineer, sitting nearby. The team will monitor the video feed on a screen. It comes equipped with a laser-aided crack detection and side-scan sonar system to quantify the defect. The sonar technique, that measures depth of oceans, is modified into a two-directional system where it can measure the length and breadth of the defect, a railway official said.

Railway officials can get the coordinates and size of each defect, which they can compare five years later. This in turn increases the reliability of the maintenance work planned. The final bridge report is also given in a compact innovative format, making it easy for bridge engineers to suggest maintenance work.