Renewal of 424 km of Rail, Sleepers by March on Thiruvananthapuram and Palakkad Divisions

Jan 11, 2018 Posted by Indian Railways Updates Indian Raliways News Comments Off on Renewal of 424 km of Rail, Sleepers by March on Thiruvananthapuram and Palakkad Divisions 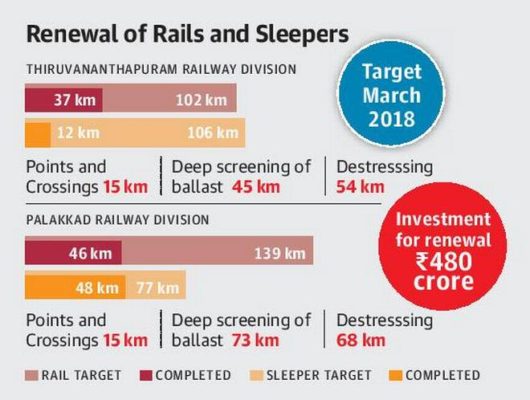 THIRUVANANTHAPURAM: Railways have mobilised men and machinery to complete 424-km renewal of rails and sleepers with other urgent maintenance activities in the Thiruvananthapuram and Palakkad railway divisions by March this year at a total investment of Rs. 480 crore.

Rail renewal of 102 km and 139 km and sleeper renewal of 106 km and 77 km are the targets given by Railways to the Thiruvananthapuram and Palakkad railway divisions respectively for 2017-18 as part of enhancing safety of rail users.

As Union Railway Minister Piyush Goyal has stated that the funds provided under the newly set up Rashtriya Rail Sanraksha Kosh (RRSK) with a corpus of Rs. 1 lakh crore cannot be refunded, a railway official said they had taken steps to accelerate the renewal of rails and sleepers in the State with the good monsoon prevailing.

The rail and sleeper renewal carried out in the Palakkad division was 38 km and 7 km respectively in 2016-17 and 70 km and 12 km respectively in the Thiruvananthapuram division. “The target is achievable with good weather set to prevail in the next three months. The improvement in the condition of railway track in the State after the works will reflect on the punctuality of trains in the coming months,” the official said.

Railways have engaged state-of-the-art track relaying train (TRT) imported from the US for track renewals.

The TRT has been moved for the track renewal in the Kollam-Perinad rail corridor, the official said.

In addition to these works, 267 flaws detected in the Palakkad division and 730 in the Thiruvananthapuram division this year through ultrasonic flaw detection test were removed by Railways. Internal flaws in the rails are detected using the machine and removed or secured using fish plates before they develop into fissures, the official said.