Apr 7, 2018 Posted by Indian Railways Updates Indian Raliways News Comments Off on Rating on Cleanliness in Trains & Stations by Passengers will now have direct impact on payment to Contractors’ 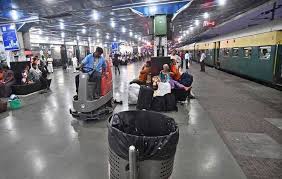 Indian Railways has just taken the next step to make sure your next trip to railway stations and on trains is one that brings you nothing but joy! Passengers will now rate cleanliness standards in trains and stations which will directly impact payment of contractors with low scores, Railways have said in a new contract drawn up for such services.

According to the contract, 30 per cent of a contractor’s monthly penalties and incentives will depend on an overall score from passengers regarding cleanliness levels being maintained by them, while the rest will be based on attendance of cleanliness staff, use and quality of consumables, linen distribution, maintenance and services, which will be monitored by Indian Railways staff.

The new rules say while the attendance record of janitors which has to be submitted to the Railways supervisor every month will carry 25 per cent weightage, cleanliness record will carry 15 per cent weightage, use of type and quantity of consumables, linen distribution, minor maintenance and result of surprise visits by officials carry 10 per cent weight each, passenger feedback and complaints carry the maximum weightage of 30 per cent.

Officials said that since the standards of cleanliness directly affect passenger onboard experience, it was imperative to include them in the process.

“Also, when passengers themselves are monitoring the cleanliness levels, we will get a true picture of the situation on board,” said a senior official of the ministry.

The feedback of Indian Railways passengers will be recorded on a GPS based system leaving no room for error, officials said.

Cleanliness has in fact been a major source of grievance of passengers and the highest number of such complaints are received from passengers regarding the same.

“If our feedback directly affects those who are in charge of the services, then they will be forced to perform to ensure they get good scores. The standards will definitely get better,” said Santosh Sinha, who travels frequently between Delhi and Patna, his hometown.

On-Board Housekeeping Staff (OBHS) entrusted with the job maintaining cleanliness in Indian Railways trains are mostly on contract and the service is now available on more than 1,700 trains. The service includes scheduled cleaning of coaches twice a day, and cleaning at any time when a passenger sends in a request.