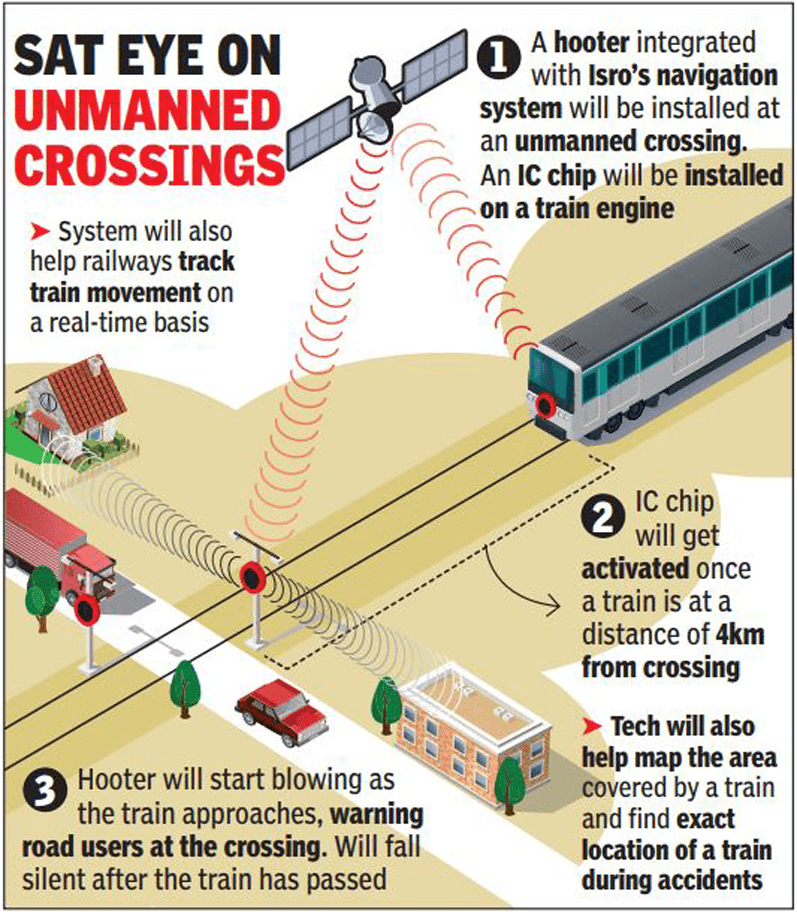 Indian Space Research Organisation (ISRO) is helping the Indian Railways use its satellite-based system to check accidents at unmanned railway crossings and track train movements on a real-time basis.

Working on a pilot project with Isro, the railways has installed space agency-developed integrated circuit (IC) chips on some train engines. The Indian Regional Navigation Satellite System (or NaVIC) will be used to warn road users of approaching trains through hooters installed at unmanned road crossings.

Tapan Misra, director of Ahmedabad-based Space Applications Centre (SAC), confirmed that “ISRO and the Indian Railways have been working together on this pilot project since June”. Explaining the functioning of the satellite-based system, Misra said, “A hooter will be activated as soon as it gets signal from the IC chip installed on a train when its engine is at a distance of 500 metres to 4 km from the crossing. The hooter, linked to the navigation system, will thus warn road users about the approaching train. It will become louder as the train comes near the crossing and will fall silent after the train has passed.”

The SAC director said, “Under the pilot project, IC chips have been installed on five engines of trains on different routes. The testing on the satellite-based hooter system has been going on since June to check if it is reliable and can function under different climatic conditions.”

He said, “ISRO is using its constellation of seven navigation satellites (IRNSS or NaVIC) for the railway safety system as the technology, once the pilot project is over successfully, will be installed on all trains across the country in phased manner.”

Misra said, “The satellite-based system will also be used for tracking trains for disseminating information about their movement on a real-time basis.” He said, “The system will also help the railways map the area covered by trains. The technology will come in handy at the time of a railway accident when it can be used to ascertain the exact location of a train.”

The push for using the space technology for the railway safety system came after PM Narendra Modi, during a national meet on September 7, 2015, asked all central ministries and state governments to make the most of the ISRO technology to provide good governance.