Railways to on board Ready-to-Eat Food Cos., IRCTC is likely to float a Tender by March-end

Jan 13, 2018 Posted by Indian Railways Updates Indian Raliways News Comments Off on Railways to on board Ready-to-Eat Food Cos., IRCTC is likely to float a Tender by March-end 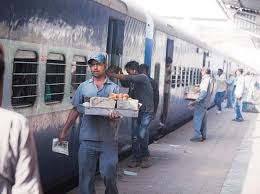 The country’s ready-to-eat (RTE) food industry is gearing up to tickle the taste buds of railway passengers.

The Indian Railway Catering and Tourism Corporation (IRCTC) is likely to float a tender by March-end to supply RTE food items directly on trains.

RTE meals were introduced in select railway stations and trains in 2016 on a trial basis, but they were being distributed through existing catering service contractors.

The railways now wants to move to the next stage, allow manufacturers to directly sell through their sales representatives.

This is a part of its strategy to ensure clean food for passengers.

This can be a huge boost for the RTE food market, which is projected to grow at a compound annual growth rate of around 22 per cent till 2019.

“Our plan is to provide healthy food. One company may not be enough for the huge volumes that the railways require. So, we may go for zone-wise or train-wise tender. It is yet to be finalised,” an official said.

About 23 million passengers travel on trains on a daily basis.

Indian Railways provide approximately 1.1 million meals to passengers every day, of which one million meals are provided on board. Last year, IRCTC had signed a memorandum of understanding (MoU) with DRDO for transfer of technology for processed food pouch, so that RTE food can be warmed and eaten straight out of the packet.

Besides this initiative, IRCTC is also targeting to provide 100,000 online meal orders per day over the next couple of years through e-catering.

Currently, only 7,000 meals are being booked online every day.

Around 193 stations and 1,516 trains are covered under the e-catering policy.

As part of its catering policy, IRCTC has taken over the operations of 333 of 335 mobile pantry cars that were run by contractors.

According to the new catering policy, launched in February last year, all mobile pantry, food plazas, and base kitchens will be brought under IRCTC.

IRCTC has also invited multi-national players such as French food services and facilities management company Sodexo and Travel Food Services (TFS), who operate lounges in airports, to manage its base kitchens.

The plan also includes a road-map to upgrade at least 16 base kitchens.

This came after a recent Comptroller and Auditor General report said the food articles supplied in railways are unsuitable for human consumption.