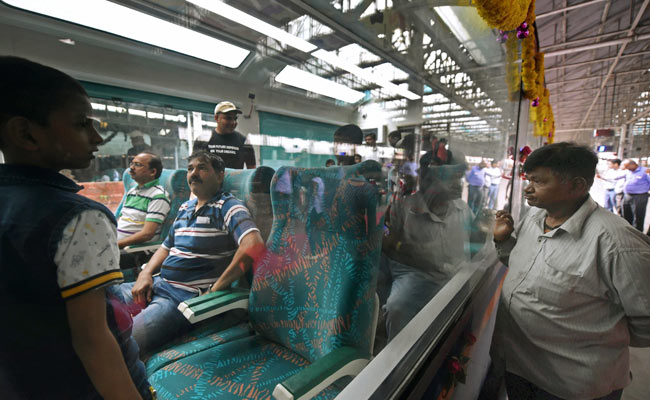 With a view to provide a delightful travelling experience to passengers, the Central Railway introduced a see-through Vistadome coach on Mumbai-Goa route from Monday, officials said. The Dadar-Madgaon Jan Shatabdi Express has a special coach with glass-roof Vistadome, rotatable chairs and hanging LCDs, offering panoramic view of the surroundings.

“A Vistadome (glass-top) coach will be attached to the Jan Shatabdi Express running between Dadar and Madgaon from September 18,” CR’s spokesperson Sunil Udasi said.

This special and aesthetically-designed Vistadome air-conditioned coach, is a first-of-its-kind in Indian Railways, he said.

“Commuters travelling on this train will have this special coach with a glass-roof Vistadome, rotatable chairs and hanging LCDs for entertainment. A unique feature of this Rs. 3.38 crore 40-seat coach is the double-wide reclining passenger seats that could be rotated 360 degrees for a better sightseeing experience,” Mr Udasi added.

A statement issued by the CR said, the passengers or tourists can now sit relaxed in their seats and enjoy panoramic view from the Vistadome coach, unlike the stereotype train compartments.

This special coach was received by the CR at its headquarters- the Chhatrapati Shivaji Maharaj Terminus (CSMT) in the first week of September. Booking for the Vistadome coach opened at all computerised reservation centres and on website from today, he informed.

According to Mr Udasi, this train will run three times a week during the monsoon period and five days a week once the monsoon gets over.

The departure time of Jan Shatabdi Express is 5.25 am from Dadar and it reaches Madgaon at 4 pm the same day.

The Vistadome coaches have been built in The Integral Coach Factory (ICF) in Chennai, Tamil Nadu.
Mr Udasi said, the fares for this coach will be equivalent to that of the executive class in Shatabdi Express without catering charges. The reservation charges, GST and any other charges will be levied in addition to the basic fare.

“There shall be no concession and all passengers will be charged at full fare. Minimum chargeable distance shall be 50 km,” the official added.

A few months back, at the launch of the coach, former Railway Minister Suresh Prabhu had said the Vistadome coaches were being introduced for the first time in the country to promote tourism.