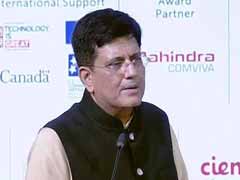 Railways Minister Piyush Goyal addressed the India Mobile Congress in New Delhi today. Apart from Mr Goyal, the three-day event is being attended by communications minister Manoj Sinha, law and IT minister Ravi Shankar Prasad, among others. The India Mobile Congress is the first ever mobile, Internet and technology event in India and is designed to be along similar lines as the Mobile World Congress (MWC) that is held each year in Barcelona, Spain. The event is not affiliated with GSMA, the body that organises the MWC and satellite events across the world, but has been put together by Cellular Operators Association of India (COAI), a group that represents most of India’s leading telcos.