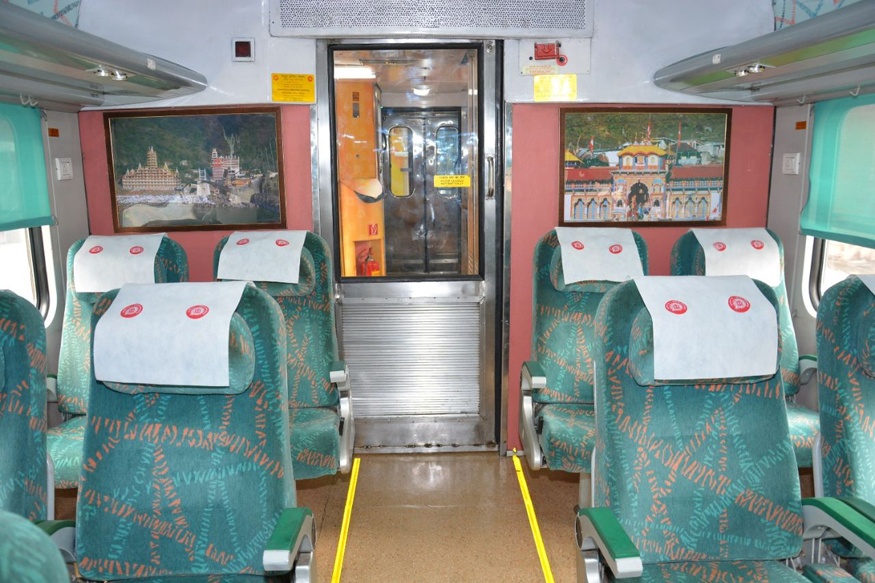 The train, which will run between Uttarakhand’s Kathgodam and New Delhi, covering a distance of 282 km, now has a complete new refurbished interior with colorful vinyl wrapped seats and on-board entertainment services like luxury trains.

The new refurbished Shatabdi Express with enhanced features will leave for Kathgodam on Tuesday morning.

The new version also boasts with features like vibrant vinyl wrappings in doorways, gangways and luggage rack panels, while the compartment aisle has been earmarked with fluorescent strips for guidance of passengers.

The railways has also worked on the coach exterior by applying an anti-graffiti coating for enhanced protection and an all anti-abrasion permanent coating for the polished look of coach flooring.

he Indian Railways has upgraded the toilets with additional features such as dustbins, personal seat covers, automatic odour and hygiene control system in all coaches. (Photo: News18.com)

It has also upgraded the toilets with additional features such as dustbins, personal seat covers, automatic odour and hygiene control system in all coaches.

It has also provided disposable head rest covers in the executive class coaches.

Emphasising on on-board entertainment, the railways with the use of innovative technology, has provided Wi-Fi hotspots in the train so that the passengers can enjoy HD streaming of entertainment over their smart mobile phones.

Railway officials also said that special emphasis have been made with regard to upkeep of various passenger amenity fittings, and all the coaches have been provided with integrated Braille signages.

A railway official said that it also plans to provide CCTV and GPS based passenger information system in all these coaches.

For better catering services, trolley service have now been introduced in the train.

Under this Operation Swarn, the Railways has planned to spend Rs 50 lakh on each train. The Rs 25 crore venture covers 30 trains in total – 15 Rajdhani and 15 Shatabdi Express trains.

Railway has planned to progressively upgrade all Rajdhani and Shatabdi trains of similar or higher standards by March 2018.

The fifteen Rajdhani Express that would be covered under Operation Swarn include the ones plying to Mumbai, Howrah, Bhubaneshwar, Patna and Ranchi, while the Shatabdi Expresses running between Howrah-Puri, New Delhi-Kanpur, New Delhi-Chandigarh and Howrah-Ranchi are the ones included amongst the 15 premium trains under the project.