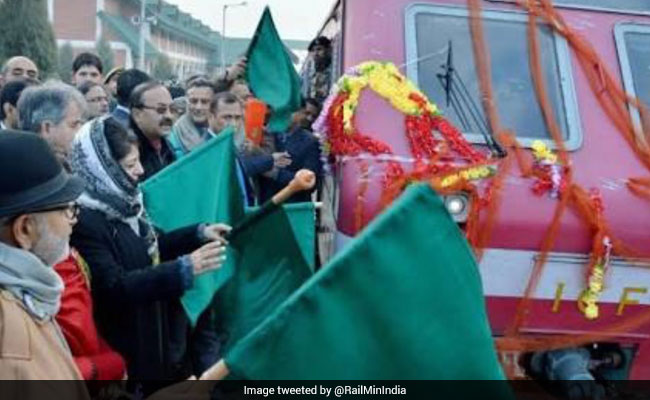 Aiming to provide a delightful travelling experience to the picturesque Kashmir valley, the Railways today announced a Vistadome train which would also serve the famous Kashmiri ‘Wazwan’ to the tourists. “Tourists need to enjoy the beauty of the Valley,” Union Railway Minister Suresh Prabhu said. He also stated that the Kashmiri cuisine would make it to the catering list of the railways.

“The chief minister (Mehbooba Mufti) and I have talked about how to increase tourism by virtue of railways. So, we will soon start a Vistadome train because I do not think there is any other place in the whole world like Kashmir,” he said.

“When people come to see the beauty of Kashmir, how will they see it sitting inside a train? So, we will launch it here. We have placed an order with our coach factories for the Vistadome train,” he said.

The union minister was speaking at a function, after remotely laying foundation stones of five new halt railway stations on Baramulla-Qazigund rail section, at SKICC.

He said Prime Minister Narendra Modi has stressed that Kashmir is very important for the government. So, this is a small gift from the railways to provide “succour” to the people of Kashmir, he said.

The Chief Miniter pointed out that five stations were needed.

Mr Prabhu said the railways would start serving Kashmiri food as well as the handicrafts from the valley in the trains soon.

“The food here tastes so well and I think we cannot find it anywhere else. To let the people have the taste of the Kashmiri food, we will start serving Kashmiri food via e- catering through IRCTC,” he said.

Similarly, the Kashmiri handicrafts, which are famous world over, will be e-marketed through IRCTC so that people here get employment, he said.

He said railways would help in the development and prosperity of the state.

“The biggest worry of our countrymen, Modi-led government and the state government is how to provide jobs to the people here, how to make people prosper and flourish the tourism sector in the state.

“For all this, connectivity is a must. I remember the former chief minister (Mufti Mohammad Sayeed) asked me to connect Kashmir with Delhi.

“I told him that we will not only connect Kashmir with Delhi, but also with our hearts,” Mr Prabhu said.

On the occasion, Chief Minister Mehbooba requested Mr Prabhu to provide a halt station at Naina Batpora area in south Kashmir’s Pulwama district, the demand made by the locals present at the function.

The union minister assured the people that the halt station would be provided.

Mr Prabhu earlier paid obeisance at the Amarnath Cave shrine and prayed for the peace in the state.

“I paid obeisance at the Amarnath Cave shrine (this morning) and prayed for the peace of the people and for the strength to the central as well as the state government to work for the betterment of the people so that Jammu, Kashmir and Ladakh becomes the best developed region in the country,” he said.