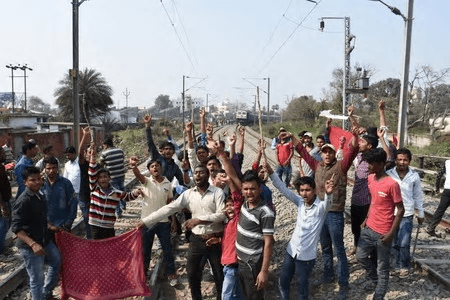 Thousands of job aspirants for the recently advertised railway Group D recruitments, blocked the railway track at Ara railway station for almost five hours on Friday to protest against reducing the age limit for recruitment in Indian Railways and making ITI certificate mandatory to apply.Ara station master SK Jain said, “The job aspirants squatted on the railway tracks from 8.35 am till 1.30 pm on Friday.

As a result many trains were stranded at different stations.Though we accepted their memorandum in the morning and assured to convey their grievances to higher authorities, agitating students refused to budge.

The demonstrators shouted slogans against the central government and displayed posters that read “hum pakoda nahi bechenge”, “protest against surgical strike on railway job aspirants”, “notify more jobs in Railways”. The protest left nearly a dozen police officials injured and services on the Patna-Mughalsarai section of the East Central Railway paralysed.”Students pelted stones at the police when officers tried to disperse them in which nearly a dozen of them were injured,” a district police official said.

The police opened fire to disperse the protesters after they damaged the engine of a passenger train and tried to ransack the railway station. The blockade was lifted at about 1.30 pm after police chased away them away.

Indian Railways has announced more than 1 lakh jobs which was notified in RailNews ( that will be available for high school pass-outs to engineers.  The railway ministry has issued notification for around 65,000 jobs in Group D category that includes Trackmen, Gangman, and another notification for hiring 27000 personal as Locomotive Pilots and Assistant Loco Pilots. The minimum qualification required for these jobs is high school pass and ITI diploma, and the last date for filing application is March 12.

Indian Railways is among the largest employers in the world with a workforce of 13 lakh employees. The national transporter is sprucing up its safety infrastructure by hiring more gangmen. Around 1.2 lakh positions related to safety are currently lying vacant.

Union Budget 2018-19 has for the first time outlined jobs/mandays that government’s infrastructure development projects and social welfare schemes can generate. An ET analysis of the Budget has shown that at least five million jobs will be created, absorbing nearly half of the 10 million people who enter the country’s workforce annually.

These projects and schemes include construction of national highways, railway tracks, building toilets under the ‘Swachh Bharat’ mission and rural houses under MGNREGS, creation of cold chains and food parks and the extended ‘Pradhan Mantri Rojgar Protsahan Yojana’.

The pace of job creation is often considered an important barometer of the government’s performance. Industry estimates that in FY12-16, India created 3.65 million new jobs a year.