Railway Bridge On Chenab River To Be Higher Than Eiffel Tower

Jun 13, 2017 Posted by Indian Railways Updates Indian Raliways News Comments Off on Railway Bridge On Chenab River To Be Higher Than Eiffel Tower 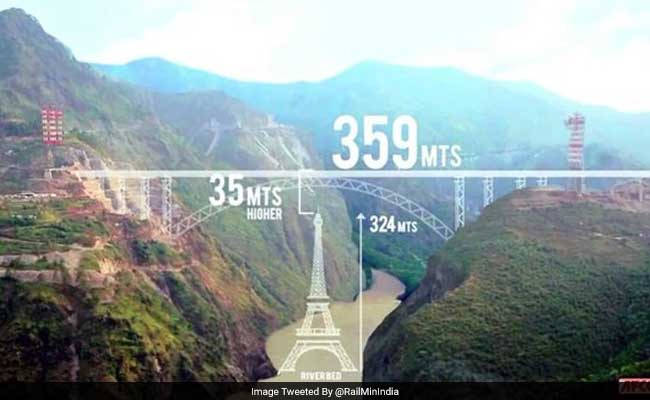 The world’s highest railway bridge that will soar 359 metres above the bed of river Chenab in Jammu and Kashmir will also be 30 metres higher than the iconic Eiffel Tower in Paris.

The bridge on the Katra-Banihal railway line at village Kauri in Reasi district is likely to be completed by June, 2019 as more than 66 per cent work has been finished.

He told PTI that more than 1,300 workers and 300 engineers have been working round-the-clock to complete the bridge by 2019.

Its construction started in 2004, but the work was stopped in 2008-09 on the aspect of the safety of the rail passengers due to frequent high velocity winds in the area.

The Railways decided to survey the area again and find some alternate site where the bridge could be constructed on Chenab river to avoid 100 kilometres-an-hour high velocity winds but finally it was decided not to change the site as it is the most suited taking into account the high altitude, said deputy chief engineer R R Malik.

He said that it was finally decided to stop train operations when the wind velocity rises to 90 kmh with the help of the automatic signalling system and anemometer (instrument to measure the velocity of winds).

He claimed that the bridge under construction can withstand winds upto 260 kmh and its lifespan will be 120 years.

The company has undertaken the construction of the bridge and the laying of rail track from Katra to Banihal is very treacherous and difficult, he said adding that 80 per cent of the railway line will have to pass through tunnels which are under construction.
He said the company has bought a crane from Italy at a cost of Rs. 20 crore to carry all the construction material to the site of bridge.

He said that it is the most challenging work to construct such a high bridge on the Chenab river and he complimented the engineers and workers for their high morale to complete the project by June, 2019.

Mr Viswamurthy said it is the seventh largest arch-shaped bridge in the world as there is no support except on both sides of the river banks and one of the supporting RCC and steel pillar is 133 metres high. The arch is being supported by piers and trusses.

Mr Malik said that force technology firm Denmak has made a model study for the construction of bridge while US-based ITASCA company has rendered help in slope stabilisation.

The steel work is being supervised by UK-based consultant David Macanjii.

He claimed that slope cuttings, transition curves and curves besides all the foundation work have been completed.

The Railways have deployed two CRPF battalions to guard the construction of bridge and for the safety of workers and engineers, said senior section engineer Anup Khare.

The Railways plan to run a DMU on the Katra-Salal section near the bridge in 2018 as the railway track is almost complete, according to a spokesman.