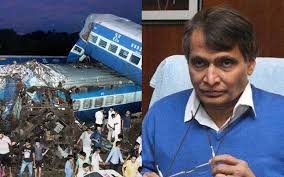 Sources in the government said Prabhu’s resignation may be accepted ahead of the reshuffle of the Union Cabinet that the government is planning to announce shortly. Suresh Prabhu, taking moral responsibility of a series of mishaps, in a series of tweets, said he met the Prime Minister, but was asked to wait before putting in papers. If sources are to be believed, Modi may accept Prabhu’s resignation just before the Cabinet reshuffle.

“I met the Hon’ble Prime Minister Narendra Modi taking full moral responsibility. Hon’ble PM has asked me to wait. I am extremely pained by the unfortunate accidents, injuries to passengers and loss of precious lives. It has caused me deep anguish,” Suresh Prabhu said in tweet.

“In less than three years as minister, I have devoted my blood and sweat for the betterment of the Railways. New India envisioned by PM deserves a railways which is efficient and modern. I promise that is the path, on which railways is progressing now,” Prabhu said on Twitter. “Under leadership of PM, tried to overcome decades of neglect through systemic reforms in all areas leading to unprecedented investment and milestones,” the minister added.

The development came hours after Railway Board chairman Ashok Mittal submitted his resignation to Suresh Prabhu on a day when Indian Railways witnessed yet another accident in Uttar Pradesh.