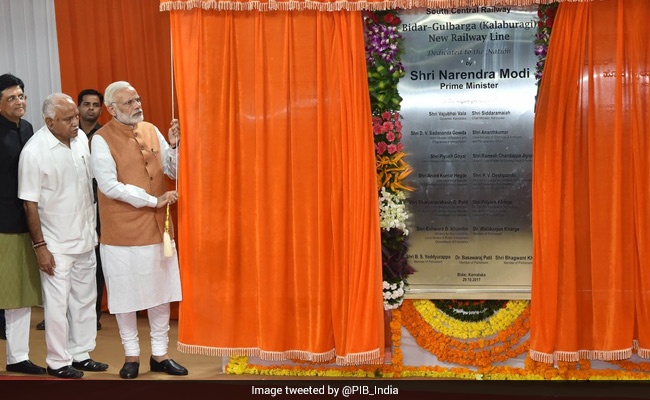 Prime Minister Narendra Modi on Sunday dedicated the 110 km railway track from Bidar to Kalaburgi in Karnataka, which will reduce distance from Bengaluru to New Delhi and upcountry destinations by 380 km and save 6-8 hours of travelling time.

The new track, laid over 16 years, was originally estimated to cost Rs. 370 crore but escalated to Rs. 1,542 crore.
The Prime Minister also flagged off the first train on the new line from Bidar station to Kalaburgi in the presence of Railway Minister Piyush Goel, Governor Vajubhai R Vala, Chief Minister Siddaramaiah and Union Ministers from the state Ananth Kumar and Sadananda Gowda.

The diesel-electric multiple train (DEMU) local service will cover the 110km between Bidar and Kalaburgi in two hours with brief halts at 12 stations en route.

Though the foundation stone for the project was laid in 1996 when Janata Dal-Secular supremo H D Deve Gowda from the state was the Prime Minister, construction began only in 2000 under the BJP-led NDA government and the railways took 16 years to complete it.

“The new track provides direct rail connectivity from Bengaluru to Bidar, 690km away from the state capital, and enable running more long-distance passenger and freight trains on the route,” a senior railway official told IANS here.