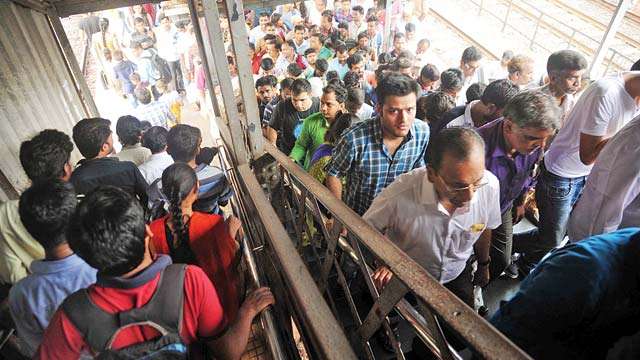 Railways min approves extension of 14 FOBs on WR; authorities to chalk out plans for new Parel-Elphinstone FOB which is expected to be ready next year.

The brutal death of 23 people in a stampede at Elphinstone Road station on Saturday was what the Indian Railways needed to wake up from their deep slumber. It was only after this unfortunate incident that a high-level meeting between the Indian Railways and state government machinery took place on Saturday for over 10 hours non-stop.

Sources said that the Union Railway Minister, Piyush Goyal, rapped railway officials for the inadequate measures taken. He also made sure that the state government and its agencies resolve their internal issues as soon as possible.

To begin with, senior railway officials said that they will now make a comprehensive plan for widening the foot-overbridge (FOB) at Elphinstone Road. “We will be studying the existing setup and chalk out plans for its expansion,” said a railway official. This decision is likely to be taken within a week.

At the site, where the stampede occurred, there is extra land next to the tracks which can be utilised for expanding the width of the FOB’s staircase. The existing width of this bridge is 5 meters while the width of the staircase is 2.1 meters. Now, they are looking at widening it further by another 2 meters or so. Sources said that Goyal approved the extension of 14 FOBs on the WR line. The New Parel-Elphinstone Road FOB is expected to be ready in a year for which Railways and the BMC are chalking out plans.

Work on the new FOB, too, will be taken up soon for which the railways and civic authorities will meet and discuss. Similarly, work on the Parel Terminus, too, will be expedited and WR officials clarified that the tender for this project was uploaded on September 29 morning.

BMC Commissioner Ajoy Mehta was also summoned by Piyush Goyal to discuss the intervention needed by the BMC.

The Commissioner of Police, Dattatray Padsalgikar, was also summoned by the railway minister for the meeting. Rehabilitation is one of the biggest need of the hour for railways. Sources said that the police has been asked to take a stern hand and ensure that railway land is cleared at the earliest. Of the Rs 11.3 crore for FOB’s in 2016-17, only Rs 1,000 was sanctioned in 2016-17 as tenders were yet to be floated.