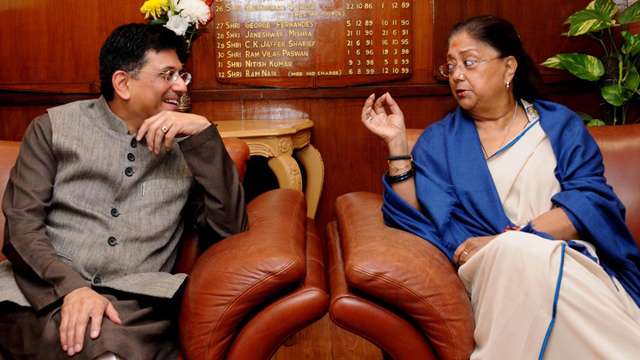 Railway minister Piyush Goel on Friday waived off haulage charges on all royal trains, including the Palace of Wheels. The move came during chief minister Vasundhara Raje’s meeting with the minister in New Delhi.

The decision will lower the operative cost and the fare and directly benefit the passengers. Meanwhile, Raje also discussed the coal crisis with Goel which was deepened in October around Diwali.

The state governments, including Rajasthan, that operate luxury trains and the Indian Railways were at loggerheads over haulage charges imposed on such trains, citing high operative cost.

During the meeting, the minister said: “In future, no haulage charges will be applicable by the Indian Railways on royal trains. Also the ministry will help Rajasthan to operate new trains.”

According to a statement released by the government, the CM had requested the minister to give relaxation in recovery of hauling charge for Royal Rajasthan Wheels train, operation of Palace on Wheels as a heritage train and not to uproot 70km old heritage railway track between Dholpur- Sarmathpura while laying a parallel broad-gauge line.

The severe power crisis happened due to shortage of coal in Rajasthan in October was also part of the discussion between Goel and Raje. The CM asked the minister to increase railway racks so coal in adequate amount could be supplied to the power projects in Rajasthan.

“This will be helpful to provide power supply 24/7 to people and farmers will get power without disruption for irrigation,” Raje said.Meanwhile the minister appreciated Raje for adoption UDAY scheme to overcome power companies from losses.