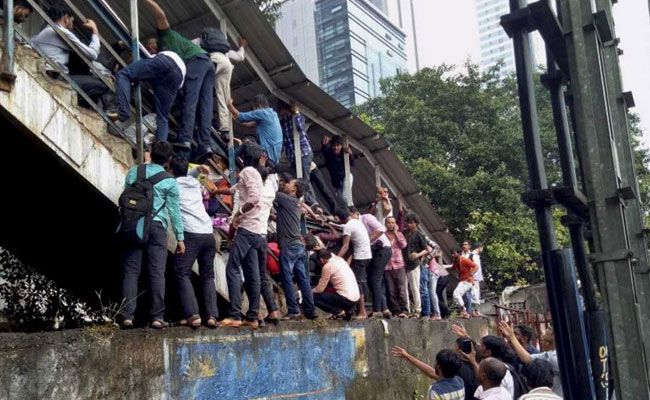 The deadly stampede that killed 23 people and left over 30 injured in Mumbai on Friday may have been triggered by the most unfortunate of mix-ups. A flower vendor’s cry of “phool gir gaya (flowers have fallen)” being mistaken as “pul gir gaya (the bridge has fallen)” might have caused the panic on a bridge linking two suburban train stations, a survivor has told investigators probing the incident, news agency PTI reported on Wednesday.

However, a senior railway official said they were yet to say for sure if this was the only cause of the accident during peak office hours on the narrow bridge connecting Elphinstone Road and Parel stations.

Railway officials, facing severe criticism for apparently ignoring warnings that a tragedy like this could occur, had launched an inquiry into the circumstances leading to the stampede, where vendors selling their flowers and other products are a common sight.

“A woman injured in the stampede told the inquiry panel yesterday that a flower vendor uttered the words ‘phool gir gaya’, which others mistook for ‘pul gir gaya’,” a senior Western Railway official was quoted as saying by PTI.

She told the inquiry panel that this set off panic among the crowd of people on the stairway and they started running, trampling others, Western Railway’s chief spokesperson Ravindra Bhakar said.

The 19-year-old woman, who was going to Vile Parle for her coaching classes, was stuck on staircase. She survived the stampede with some injuries and admitted to the KEM hospital in Parel and later discharged, he said.

Mr Bhakar, however, said it was too early to conclude that this was the only reason for the tragedy. “We will try to get detailed accounts of other injured passengers, locals who rescued them and witnesses as a part of our in-depth inquiry,” he said.

He also said the panel will find out if the stampede was sparked by rumours.

Some other survivors had claimed that a short circuit led to panic among the people crammed on the narrow bridge triggering the stampede.