Mar 6, 2018 Posted by Indian Railways Updates Indian Raliways News Comments Off on Passenger not to be charged Merchant Discount Rate (MDR) for Booking of Railway Tickets 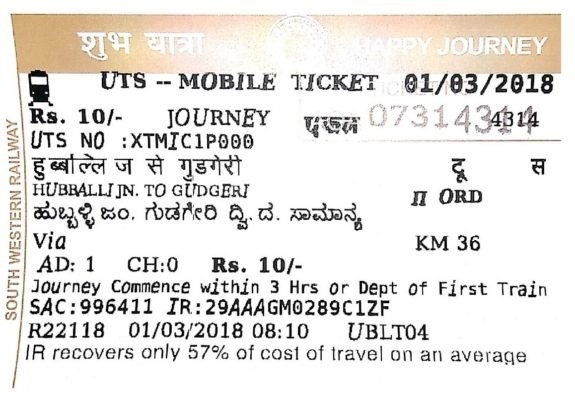 Merchant Discount Rate (MDR) charges will not be levied on passengers for booking railway tickets (at the railway ticketing counters as well as through IRCTC ticketing website) on payment made through Debit Cards for a transaction value upto Rupees one lakh. Instructions to this effect has been issued to the Banks by Department of Financial Services, Ministry of Finance on 26th February 2018. This will further help in promoting digital and cashless transactions.

The facility has been started initially at Mysuru, Bengaluru and Hubballi stations of South Western Railway and same will be extended to all other stations of Karnataka in phased manner. Name of starting station, destination, class and Mail express/Passenger etc., now will be printed in Kannada too along with existing languages i.e., English and Hindi.

Tickets being issued at these stations form one counter as trial since 01.03.2018. It will be extended to all other stations of Karnataka from 02.03.2018.

In a unique effort, first time in the history of Indian Railways, a language other than English and Hindi has been adopted with Kannada being the first. This is another feature in the Cap for South Western Railway.