Pakistan to upgrade Karachi-Peshawar Rail Line as part of CPEC project; Groundwork to start in Mar 2018; POK in trouble 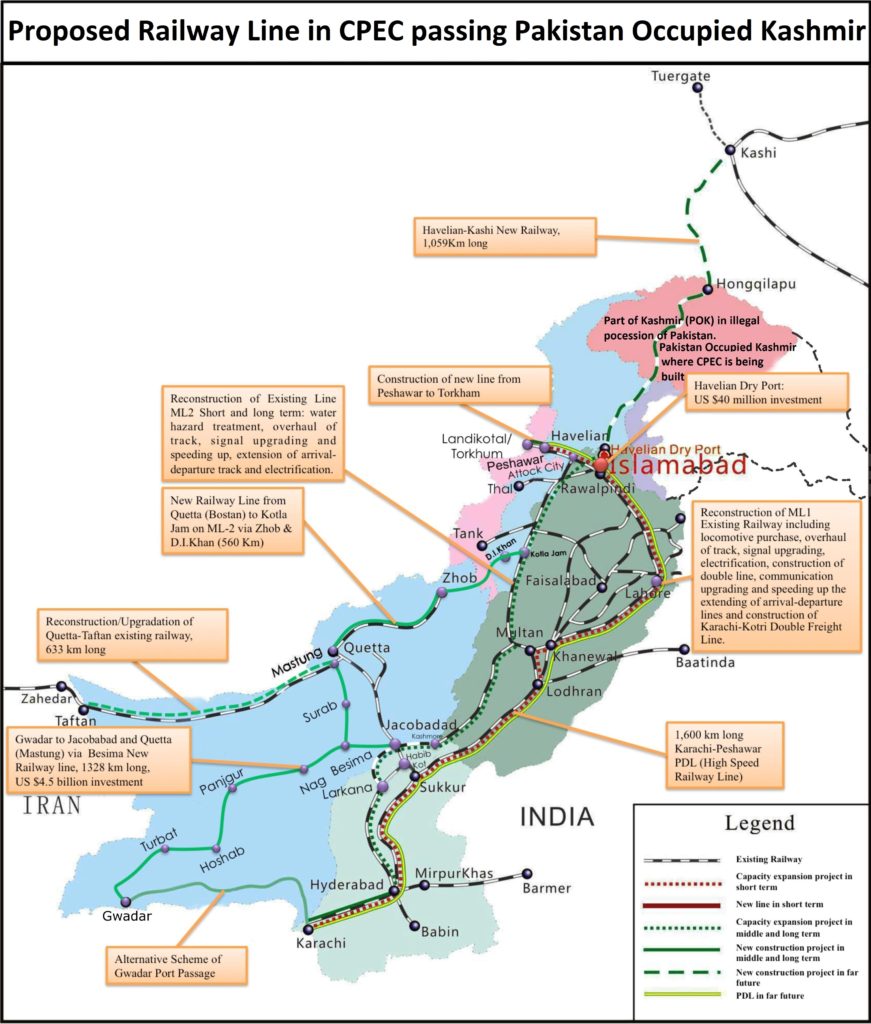 Groundwork on one of the most important milestone of the China-Pakistan Economic Corridor (CPEC) – the rehabilitation and upgrading of Main Line-1 (ML-1) from Karachi to Peshawar – is likely to be initiated by March next year, Pakistan’s Ministry of Railways Director General (Planning) Mazhar Ali Shah told on Monday. “Although Pakistan Railways has set an ambitious target for starting the groundwork, it is working hard to meet this target,” Shah said. The DG further said preliminary design of the project was in process and hopefully within three to four weeks, the design would be finalised. He said a feasibility study of the project had already been finalised while the framework agreement with China had also been signed. After finalising the preliminary design, all the procedural arrangements including commercial contract and financial clause would be completed as soon as possible, he added.

Karachi–Peshawar Railway Line is one of four main railway lines in Pakistan, operated and maintained by Pakistan Railways. The line begins from Karachi City station or Kiamari station and ends at Peshawar Cantonment Station. The total length of this railway line is 1,687 kilometers (1,048 mi). There are 184 railway stations from Kiamari to Peshawar Cantonment on this line. The line serves as the main passenger and freight line of the country. 75% of the country’s cargo and passenger traffic uses the line. The line is currently undergoing an six-year ₨.886.68 billion (US$8.4 billion) upgrade and renovation as part of the China Pakistan Economic Corridor, with average rail speeds expected be doubled to 160 kilometers per hour upon completion.

The present-day Karachi–Peshawar Railway Line was built as a patchwork of different railways of unified India during the 19th century. The Britishers, so as to establish connectivity in this region, had mostly depended on its Bombay Presidency (presently Bombay is in India renamed as Mumbai) by pulling funds to construct the Railway lines in different phases. A majority of the workmen were Indians (importantly Hindus) who toiled to construct the line from Karachi to Peshawar during that time. The Indian Staff comprised of resources in various categories like P-Way, Open Line, Telecom, Operating, Traffic, Accounts, Stores including Gangmen category. Few of the lines were even funded by the then Madras Presidency too (Madras is in India renamed as Chennai). There are Tamilians, Keralites too who migrated to Pakistan. Even today, there is a small community of Tamils in Pakistan who converted their religion and became Muslims (Muslim Tamils in Pakistan) migrated from the South Indian state of Tamil Nadu. These Muslim Tamils have integrated with the Urdu speaking Muhajir community. Notably, Schindias had also contributed a lot of fund for laying the lines and Britishers had an arrangement towards this collaboration with Schindias.

The present day line consists of the following historic sections built between 1861 and 1900:

The Scinde Railway was constructed in 1861 as a 1,676 mm (5 ft 6 in) broad gauge railway line between Karachi and Kotri. Work on the line had commenced in April 1858 and was the first railway line for public use in the region. Following the completion of the line, the Indus Steam Flotilla began docking in Kotri (instead of Karachi) from Multan. The Punjab Railway was constructed and inaugurated in late 1861 as a 1,676 mm (5 ft 6 in) broad gauge railway line between Multan and Lahore, and later extended to Amritsar. Thus the travel time between Sindh and Punjab was greatly reduced together with the Scinde Railway, Indus Steam Flotilla and Punjab Railways; what normally took 40 days to travel between Karachi and Lahore now took 48 hours to transport passengers and cargo.

In 1870, the Scinde, Punjab & Delhi Railway was formed from the incorporation of the Scinde Railway, Indus Steam Flotilla, Punjab Railway and Delhi Railway companies in order to increase efficiency of passenger and cargo transport between Sindh and Punjab. However, the rail gap between Kotri and Multan was considered a hassle as the Indus River and Sutlej River were major obstacles to cross at the time. In 1871, the Indus Valley State Railway was inaugurated and construction began on extending the railway line from Multan south towards Bahawalpur(crossing the Sutlej River) and on wards to Rohri. In 1876, the Punjab Northern State Railway was constructed between Lahore and Peshawar and in 1883 the Attock Bridge over the Indus River was opened. In 1878, the Empress Bridge over the Sutlej River was opened and in 1879 the Indus Valley State Railway reached Rohri. From Rohri, a steam ferry would transport eight rail carriages at a time across the Indus between Rohri and Sukkur. This was found to be cumbersome and time-consuming. In 1889, the Lansdowne Bridge between Rohri and Sukkar was opened and in 1893, work on the Kotri Bridge commenced. It was only in 1900 that the section between Rohri and Kotri was completed. In 1885, all the companies were merged to form the North Western State Railway.

According to the railway officials of Pakistan, in the new development project, China Pakistan economic corridor CPEC total investment volume has been increased to over $51.5 billion for modernized CPEC railway lines in Pakistan from Karachi to Peshawar. The china and the Asian development bank have agreed to lend $8 billion to Pakistan to upgrade the railways infrastructure under the project of CPEC railway lines in Pakistan.

CPEC is around 3,000 kilometer networks of roads, pipelines and railways to transport oil and gas from Gawadar port in Pakistan to Kashgar in Xinjiang Uygur province of china. The project consist the up gradation of 1872 KM railway track from Karachi to Peshawar,  dualization of the roads of Multan, Lahore and Rawalpindi, and double the Lahore- Peshawar railways track.

China took serious to develop and upgrade the dilapidated railway network of Pakistan. The CPEC consist of $46 billion of energy projects, port development and infrastructure development.

The Pakistan’s railways system is in a huge a losses since many years due to lack of funding. Some of the railway track has been destroyed and many of them are not able to use. Bad governance, corruption and negligence are factors too.

Under CPEC Pakistan’s railways will be modernized. CPEC will provide funds to develop railway network from Karachi to Peshawar in Pakistan.  Financing for the railway system has been enhanced to 8 billion dollars from the earlier allocation of 3.5 billion dollars under the 46 dollars CPEC program lifting to the 51.5 billion dollars.

Working on the first phase of the CPEC short term project has been initiated. The focus on Karachi – Peshawar railway line, has being made signal free and gate free line. Main purpose of this type of railway lines, to make the journey safe and fast to facilitate public and reduce chances of accidents. The track will able for high speed trains.

In CPEC project, the railways is also preparing to link Federally Administrated Tribal Area (FATA) with Peshawar and Torkham.  Later on the railway line will approaches to the rout of Chaman-Spin Boldak rail to link Afghanistan and central Asia through Peshawar Torkham in the third phase of the CPEC.

These railways lines will be modern and safer for traveling of foreigners, fence will built as the motorways to insure its safety and security as international standard. As early the government had no priority to improve the railway network as well management operations but considering the foreign interest now it hopes for better infrastructure of the railways in Pakistan.

CPEC is an opportunity for Pakistan to make itself sustainable and profitable railways for the future. Pakistan claims that this project will develop the less developed areas of Pakistan especially Balochistan whereas the actual ground realities are different. Balochistan people were tortured, killed and are being fled away with coercion for building CPEC railway track from Gawadar to Quetta and Jacobabad via Besima. Around 560 KM of track will be made from Bostan to Kotla Jam on main line-2 via Zhob and Dera Ismail Khan, while around 680 KM of track will be laid from Havelian to Khunejrab.

The Karachi- Peshawar railways are almost processed almost 80 percent of the passenger and freight traffic, but its efficiency has decline to around 60 kilometer per hour due to mismanagement and bad track. The up gradation will took six years to complete replacement of bridges and double the tracks and improve the signals. But it efficiency will to around 160 km per hour. It will ensure fast traveling and shifting goods to the regional markets.

The CPEC railway lines will then be extended in the next phase to link Gawadar with Peshawar and then Haveilian, Abbottabad, with Khunjerab.

Plan for reconstruction and up gradation of around 50 railway stations has been started, which, It would be helpful for generating revenue and modernizing the public utility.

Under the mega project, the construction work on two (Narowal and Nankana Sahib) of the three stations of Sikh tourism has already been stared with approved cost of Rs 659.99 million while the tenders are in process for upgradation of Hasanabdal station. The stations built over 100 years back were in bad condition.

The Raiwind City railway station will be completed by February 2018 at a cost of about Rs135 million. This was said by Pakistan Railways CEO Javed Anawar said at the ground-breaking ceremony on Saturday of the project.

Punjab taking steps to benefit from CPEC’s western route. Housing colonies like satellite towns should be developed in the vicinity of interchanges at Fateh Jang, Pindigheb and Tarap so that mass migration to Islamabad and Rawalpindi is managed and discouraged.

The working paper proposed that the provincial roads linking the CPEC western route with M2 and N5 need to be developed and dualism.

The western corridor will provide fast and world class connectivity to southern districts of Khyber Pakhtunkhwa (KP) like Dera Ismail Khan, Tank, Bannu, Lakki Marwat, and Karak to Islamabad and Rawalpindi. Similarly the tehsils of Mianwali, Jandh, Pindigheb will by 60-90 minutes commute from Islamabad-Rawalpindi.