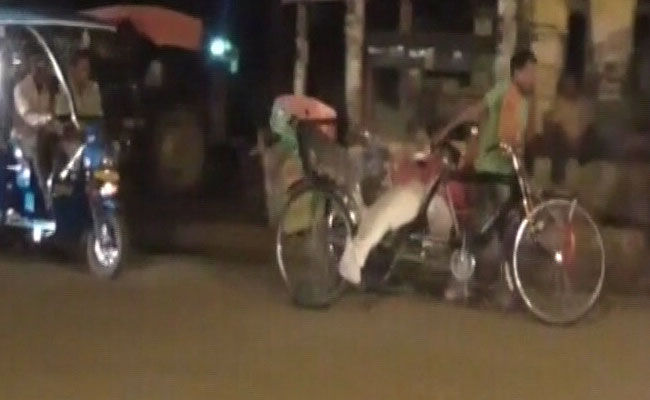 The local administration in Uttar Pradesh’s Banda district has blamed the Government Railway Police or GRP for not helping a family carry their relative’s body for post-mortem in a vehicle. A video of the body being carried on a rickshaw had appeared on social media.
“Instead of arranging for an ambulance to carry the body of Ram Asrey, it was taken on a rickshaw. This was revealed in a probe carried out by SDM (sub-divisional magistrate) Sadar. Prima facie, the GRP has been found guilty,” Banda District Magistrate Mahendra Bahadur Singh said.

“The GRP police station in-charge, in his written statement, had said that the family members of the dead man had come to the police station and willingly took the body on a rickshaw for post-mortem,” he said.

Mr Bahadur said the sub-divisional magistrate’s report said the GRP should have contacted a hearse van or the chief medical officer to arrange an ambulance. “But, the GRP showed laxity,” he said.

GRP police station in-charge Indramohan Barola, however, denied they did not follow procedures. “The government has made a provision of making Rs. 1,000 available to carry out the last rites of an unknown body, but in case the body is identified, the rule is not applicable,” Mr Barola said.

“In this case, the onus of taking the body for post-mortem lies on the family members of the dead,” he said.

The family members of Ram Asrey, who died at 44, carried his body for post-mortem on a rickshaw after officials allegedly refused to give an ambulance. The body was recovered from a railway track on July 8 near Atra railway station.

Chief Medical Officer Santosh Kumar had yesterday said the family members had not given any information for requirement of an ambulance.

Last month in Kaushambi, the uncle of a seven-month-old girl carried her body on a bicycle after his plea for an ambulance fell on deaf ears. In May, a labourer carried the body of his 15-year-old son on his shoulders after allegedly being turned away by doctors at a government-run hospital in Etawah.