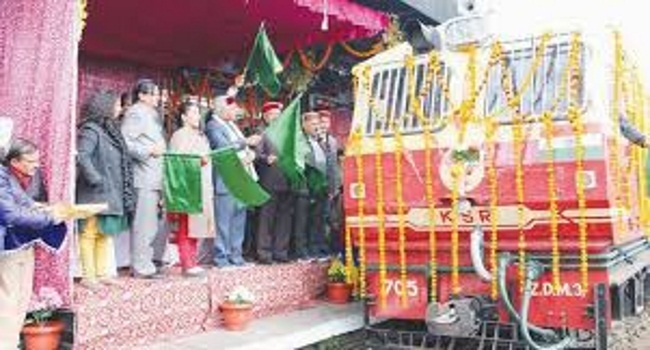 Tourists can now enjoy a joyride here on the UNESCO world heritage railway track on the lines of a similar service in Darjeeling in West Bengal.

The joyride train will run between Shimla and Shoghi stations, covering a distance of about 15 km in an hour and five minutes. This is a section of the heritage track, which goes up to Kalka.

The one-way fare for the Shimla-Shoghi ride amidst the scenic beauty of the `Queen of Hills’ will be Rs.260. Tourists can book online. The train would have chair-car coaches.

Unlike the well-known toy train which runs from Kalka to Shimla, this joyride is within the Shimla city limits.

Lok Sabha MP Virender Kashyap on Thursday flagged off a trial run. As of now, the service will operate up to 28 February. Kashyap said he has asked the Railways to continue it because of its huge tourism potential.

“The trial run of Shivalik Delux Express has started today to attract tourists and it would benefit tourism sector positively in the hill state,” he said.

Thousands of tourists visit Shimla in winters as well as summers and the train would prove an additional attraction for them, he said.

The Shimla-Kalka railway line is a 2 ft 6 in (762 mm) narrow-gauge track along a mostly mountainous route. The track is known for dramatic views of the hills and surrounding villages.

The railway line was built in 1898 to connect Shimla, the summer capital of India during the British Raj, with the rest of the Indian rail system.

At that time, 107 tunnels and 864 bridges were built throughout its course. However, 102 tunnels remain in use now.

On 8 July 2008, UNESCO added the Kalka-Shimla Railway as an extension to the World Heritage Sites of Mountain Railways of India.

The route winds from the foothills of the Shivalik Hills at Kalka and covers several important points such as Dharampur, Solan, Kandaghat, Taradevi, Barog, Salogra, Totu (Jutogh), Summerhill and Shimla.