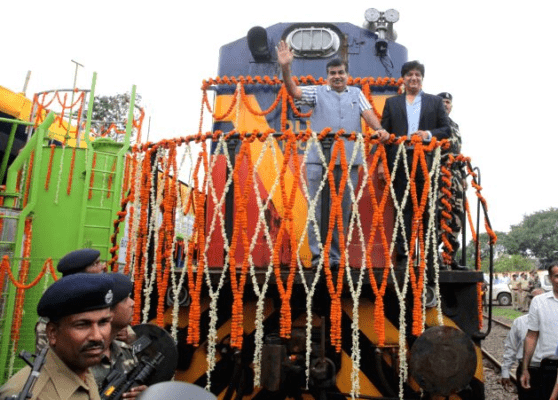 Union Minister for Road Transport, Highways and Shipping Nitin Gadkari may get the additional charge of the Ministry of Railways if Union railways minister Suresh Prabhu’s resignation is accepted.

Prabhu had offered to resign on Wednesday taking moral responsibility for train mishaps, the most recent being the Kaifiyat Express which derailed on Wednesday, but Prime Minister Narendra Modi had reserved his decision and asked him to wait. Finance minister Arun Jaitley had also reiterated that Modi will take a stand on the resignation later.

Gadkari has emerged as a top favourite with several media reports claiming that he may be asked to take charge of the railway ministry.

And with a cabinet reshuffle already on the cards, a decision could be announced anytime soon. With Nitish Kumar-led JD(U) now part of the NDA alliance, a cabinet expansion is likely with several new faces finding space in the Narendra Modi cabinet.

According to party insiders, talks of a joint infrastructure ministry has re-emerged as well. The new ministry, it is being said, might be created combining shipping, highways, and railways or civil aviation and railways.

The possibility of the latter taking place seems higher, especially since Gadkari is part of the five-member ministerial panel, headed by Jaitley, that was tasked with deciding on the process of privatising Air India. But then Gadkari also holds a special interest for transport. So, it can swing either way.

Earlier today, Air India chief Ashwani Lohani was appointed as the new Railway Board chairman following the ouster of AK Mittal. If it’s indeed a joint civil aviation-railways ministry, irrespective of which other ministries that fall into Gadkari’s laps, the BJP leader will have a familiar face to start with.

Although Prabhu was tasked with the modernisation of Indian Railways since he took over in 2014, however, his tenure has been marred with accidents, nearly 347 of them so far. The Kaifiyat Express derailment on Wednesday came within just five days of the Utkal Express which derailed near Khatauli on 19 August in Uttar Pradesh’s Muzaffarnagar district claiming 22 lives.

A two-day long statutory inquiry into the rail accident began on Tuesday in the divisional railway manager’s office in Delhi, however, initial reports claimed negligence from railway officials.

The Railways had on Sunday sent on leave three senior officials, suspended four officials and transferred one official following the train tragedy.