Nirman Samvaad: A Mega Conclave of Railways with Leaders of Construction Industry concludes in New Delhi 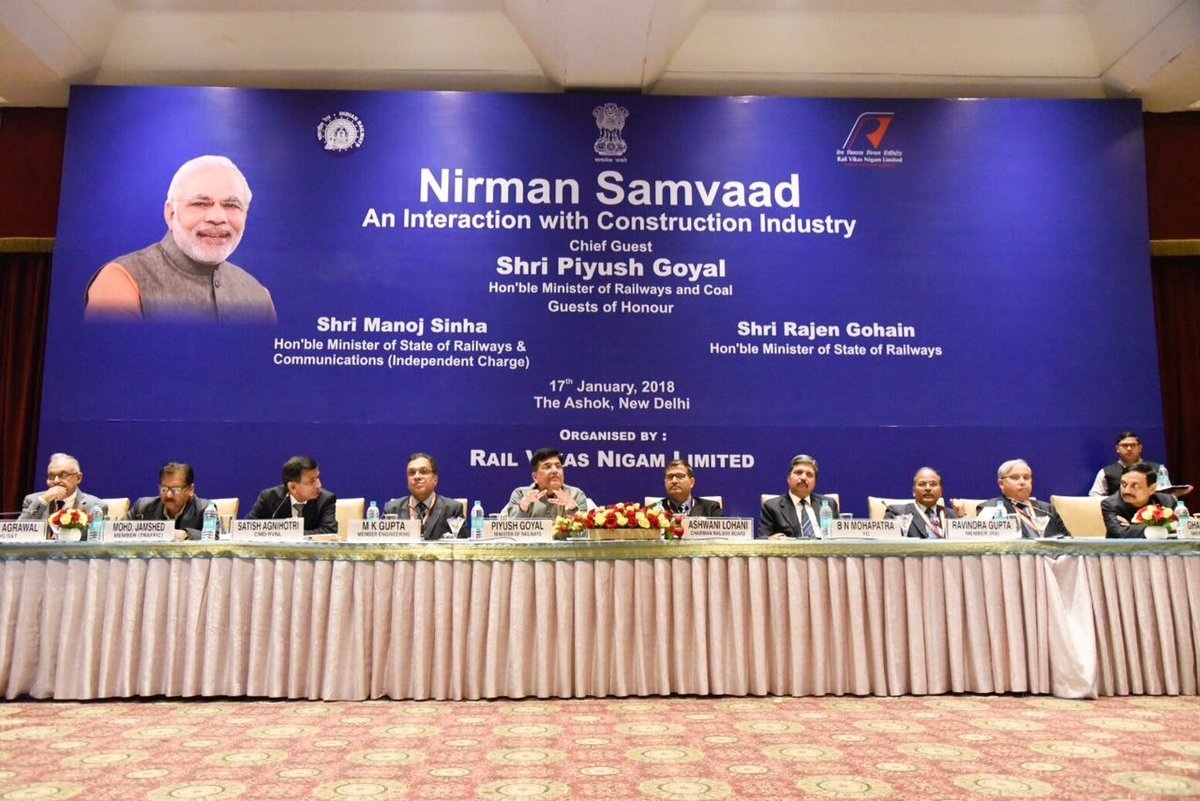 A one-day Mega Conclave called ‘Nirman Samvaad’, a first ever interaction between the Ministry of Railways and the Construction Industry concluded here. This Conclave was organized by Rail Vikas Nigam Ltd. (RVNL), a dedicated arm of Ministry of Railways for fast track implementation of railway projects. This Mega Conclave was an initiative taken by Hon’ble Minister of Railways and Coal, Shri Piyush Goyal as a step to streamline procedures and remove bottlenecks to ensure the fast track implementation of projects on the railways.  It was a major event aimed at taking measures to ensure expeditious implementation of ambitious Railway Infrastructure Development Plans.

The Conclave was chaired by the Hon’ble Minister of Railways & Coal, Shri Piyush Goyal who had a personal interaction with the participants. The conference was also attended by Chairman Railway Board, Shri Ashwani Lohani and Railway Board Members, Chairman & Managing Director, RVNL, and senior officers from Railway Board, Zonal Railways, CPSEs etc. The event was attended by the top management of 400 construction & consultation companies. During the ‘Samvaad’, 6 representatives from major construction and consultancy companies i.e. M/s KECInternational; Siemens, Larsen & Toubro, Systra MVA Consulting India Private Limited, Tata Projects Limited and Afcons Infrastructure Ltd gave presentations.

The meeting was thrown open and all participants were given opportunity to raise their respective issues and suggest remedies. The highlight of the conclave was a lively interaction session conducted by Hon’ble Minister of Railways.  The issues raised covered concerns on contract management, improving cash flows, execution of projects, expediting the inspection of various items to be procured from RDSO approved vendors, adoption of FIDIC documents by Railways, delay in acquisition of land, problems in obtaining licenses of minor minerals,  suggestions for reducing the time and cost over-run, expediting the payments of the contractors, risk sharing between the employer and the contractor, increased requirement of training of technical manpower,  availability of traffic and power blocks, proper estimation of quantities at the time of inviting tenders were discussed.

Minister of Railways gave directions that the suggestions made by the participants should be followed up and necessary changes in the systems and procedures be made to ensure that the pace of project execution is improved to implement the Ministry’s ambitious investment programme.

Ministry of Railways has ambitious plans for development of Rail infrastructure to meet the ever increasing transport needs of the nation and a huge investment in this sector has been planned. The main focus is on:-