Mumbai to get first AC local train in September this year

Jun 14, 2017 Posted by Indian Railways Updates Indian Raliways News Comments Off on Mumbai to get first AC local train in September this year 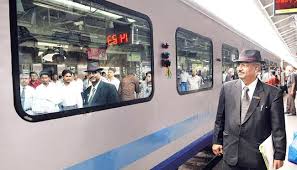 Air-conditioned local trains will start plying on the suburban sections of Mumbai from September this year.

“The trial runs are underway and if everything goes as per our plan, which is most likely, then the commercial operations of this silver-blue coloured AC local would start from September this year,” said member, rolling stock of the Railway Board, Ravindra Gupta.

Gupta was interacting with the mediapersons from Mumbai at Rail Bhawan in New Delhi.

“We will be procuring nine more AC rakes taking the total to 10. They would be plying on both Central and Western Railway corridors,” said A K Mittal, chairman, Railway Board.

The AC local had arrived in Mumbai on April 4, 2016. Initially, the trial runs were conducted on central railways but due to the height of electrical overheads and other issues, it was shifted to western railway last month.

Railways has, however, not fixed the fare structure.

Mohammad Jamshed, member (traffic), railway board, said “we are working on it (fares) and the suggestions for fares would be taken into account after considering the needs of Mumbaikars. We will decide the fare which will be in the favour of the Mumbaikars.”

Equipped with GPS and micro-processor-based software system, this 12-car local has a seating capacity of 1,208 and standing capacity of 4,936 passengers. Around 108 to 112 passengers can travel in one coach.

Built at a cost of Rs 54 crore, the train doesn’t have first class and general class division; the entire rake would be vestibule-connected (in two parts of six coaches each) and can run at the top speed of 110 kmph.