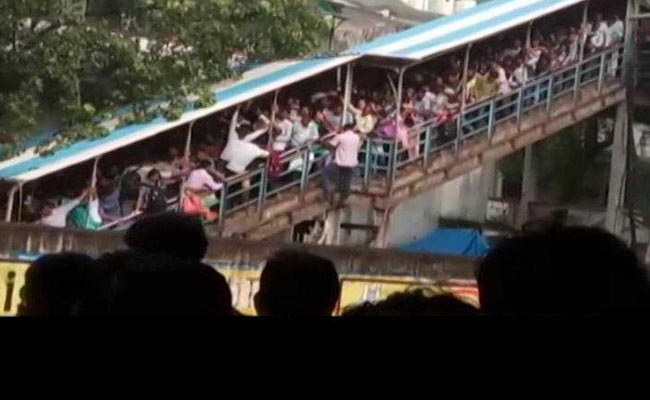 With 23 people dead in the stampede at the Elphinstone railway station in Mumbai, Maharashtra Navnirman Sena chief Raj Thackeray today warned that “not a single brick will be allowed to be placed for the bullet train in Mumbai” until the infrastructure of local railways was made better.

“I shall not allow even a brick for the bullet train project to be laid. First resolve all the basic problems of Mumbai commuters. If (Narendra) Modi wants, let him construct it in Gujarat. If they use force, we shall also retaliate,” an agitated Mr Thackeray said.

Attacking the ruling BJP, he called Prime Minister Narendra Modi a “liar” who changed all his statements before and after the 2014 Lok Sabha elections. “We have never seen a PM who is such a big liar. He made big promises and then dismissed them as ‘election jumlas‘. How much can a person lie in this fashion?” asked Mr Thackeray, according to news agency IANS.

The MNS chief claimed that Railways Minister Suresh Prabhu was replaced by Piyush Goyal only to push through the Bullet Train project. “This Goyal is useless, Prabhu was good,” he said.

“Why do we need terrorists or enemies like Pakistan? It seems our own Railway is enough to kill people,” 49-year-old Mr Thackeray added.

He also claimed that stampedes will continue to occur in Mumbai till hordes of migrants keep pouring into the city. “There has been a collapse of infrastructure facilities due to the migrant influx from other regions,” he said.

Mr Thackeray claimed that his party had written to authorities for building a new bridge at the stampede spot but no action was taken on his suggestion. The Kakodkar committee had proposed an expenditure of Rs. 1 lakh crore to improve the railway infrastructure but nobody acted on it, he claimed.

The MNS chief also announced that he would personally lead a morcha to Churchgate on October 5 to oppose the bullet train plans and urged all Mumbaikars to participate in large numbers.

The stampede took place around 10.30 am yesterday on the tiny bridge between the Elphinstone Road and Parel stations, which are among Mumbai’s busiest. Witnesses say four trains rolled in at the same time and a large crowd poured into the bridge that was already bursting with people taking shelter from a sudden, heavy downpour. A few commuters slipped, and people fell on them.