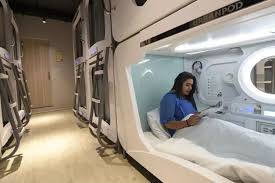 A year after launch, India’s first capsule hotel firm Urbanpod Ltd is gearing up to expand its presence across the country.

The Mumbai-based firm is looking to introduce capsule hotels at railway stations and pilgrimage centres across the country. They are also called pod hotels, a term derived from their pod-sized rooms fitted with a bed.

Urbanpod—which launched its first 140-pod property in Mumbai’s Andheri in March last year—is planning to introduce the concept in eight more locations including the National Capital Region centred on New Delhi, Bengaluru and Chennai, taking it to around 800 pods in the next two years.

To finance expansion, Urbanpod is seeking investments around Rs.20 crore from venture capitalists.

Urbanpod co-founder Hiren Gandhi said in an interview that Mumbai-based merchant bank Ashika Group has been hired for its fund-raising plan.

“Going forward, we see a huge potential with the rising real estate prices. Not only in metros, we are looking at pilgrimages, where are there different sorts of travellers. We are also trying to work something with the city railways,” Gandhi said, adding that the capsule hotel company is also looking for franchisee partners.

Gandhi said the company has participated in the bidding process run by the Indian Railways to privatize retiring rooms at various railway stations.

Besides, it is also in discussions for a potential partnership with individual and private companies which have already won the bidding for some of the railway locations, he added.

“So far, we have considered 3-4 different railway locations mainly in business districts where there will be a lot of business travellers. We will be participating in the bidding as and when the Indian Railways comes up for privatisation of the retiring rooms at the stations. We are looking at around 35 railway stations in the next five years,” Gandhi said.

While pods at its Andheri property are available for between Rs.1,000 and Rs.3,000 per night, the company is also contemplating whether it should rent them out on an hourly basis, particularly at transit places like railway stations.

A concept which took birth in Japan, pod hotels have become popular in other Asian countries including China, Taiwan and Singapore.

Citing WiseGuy Research Consultants, Forbes in a September 2017 report estimated that the global capsule hotels market stood at $159 million in 2016 and expected it to reach $226 million by the end of 2022, growing at an annual average growth rate of 6.03% over the course of the six-year period.

“In India, places like Delhi, Bengaluru and Mumbai, may find some demand of such pod hotels, particularly in the very heart of the cities. So, the audience which would probably see value would be people who go to high concentration cities and who do not want to pay so much for a hotel,” Khanna added.