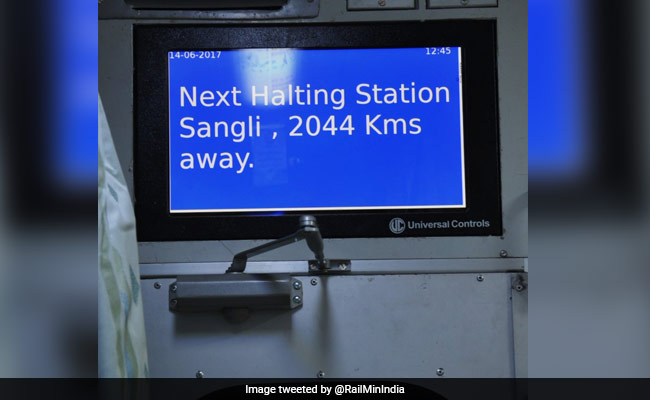 Here are 10 things to know on the Humsafar Express:

The new rake inspected by Mr Prabhu on Wednesday included many features in additional to those planned for the Humsafar Express. The new rake came with a single piece side lower berth, instead of a two-piece model previously. “Humsafar trains were already good, but we wanted to further improve the design for better passenger experience,” Mr Prabhu said on Wednesday.

The new coaches had a mobile charging point for each berth including USB charging points. Earlier, there were three chargers for eight passengers.

Each berth was provided with reading light, in contrast to only the lower berths previously.

Among some of the other features given in the new coaches were a convenient upper berth climbing arrangement, display monitor screens for the CCTV installed in the coach, and dustbins in each bay inside the coach.

In addition to these, according to a press release by the Ministry of Railways, all the existing features of Humsafar Express coaches will continue to be available.

Some of the features planned for the Humsafar Express include an anti-graffiti coating and distinctive 3D numbering on the exterior, colourfully coordinated seats, berths, partitions, curtains, improved/hygienic toilets and film type mirrors, deodorizers, dustbins and sleek bottle holders in the cabins.

A total of 11 Humsafar trains have been announced by the railways ministry in the new time table, of which six are running with a composition of 16 AC 3 Tier coaches and 2 power cars, the press release noted.

The railway minister is scheduled to flag off two Humsafar Express trains – Tirupati-Jammu Tawi (train No. 22705/22706) and Howrah-Vijayawada (20889/20890) from Vijayawada on Thursday. The remaining Humsafar trains will also be introduced in due course, the ministry said. Indian Railways plans to manufacture 10 Humsafar rakes in the current financial year at Modern Coach Factory, Raebareli and Rail Coach Factory, Kapurthala.