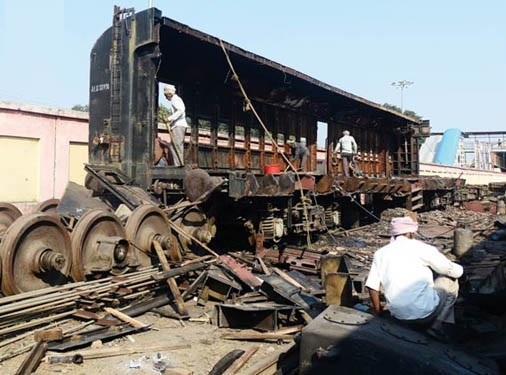 NEW DELHI: All General Managers of Zonal Railways have been advised to strictly monitor the e-auction of scrap. Total scrap sales till December 2017 of current financial year has reached to Rs. 1837 crores which is 22% higher than the corresponding sales of Rs. 1503 crores upto December 2016 of the year 2016-17

Earnings from sale of Railway scrap not only augments Railways revenue but also helps in keeping the Railway track, stations, workshops, depots neat and tidy.  In this regard, Ministry of Railways has directed all Zonal Railway & Production units to achieve Zero scrap balance by end of March 2018.  General Managers of all the Zonal Railways/PUs have been advised to regularly monitor this activity and to intensify supervision at senior officers’ level so as to promptly identify scrap and offer it for e-auction.

With the concerted efforts by all the Railways, total scrap sales till December 2017 of current financial year has reached to Rs. 1837 crores which is 22% higher than the corresponding sales of Rs. 1503 crores upto December 2016 of the year 2016-17.

Indian Railways have been selling its internally generated scrap entirely through   online e-auction.  Majority of the scrap material comprises of worn-out rails and track fittings released from track renewal/gauge conversion, steel scrap generated in course of overhaul /repairs of rolling stocks, other non-ferrous and miscellaneous scrap.

The e-auction module is part of the IREPS (Indian Railways E-Procurement System) which is a single portal of Indian Railways handling all procurements tenders and e-auctions digitally. All the Zonal Railways and Production Units use this single platform for online sales of scrap.  Monthly on an average, 200 e-auctions are conducted by Materials Managers in Divisions and Stores Depots spread all over Indian Railways.

Auction schedules and details of saleable materials are published regularly on IREPS website & updated online. The endeavor shall be continued so as to achieve the task of Zero scrap balance by end of March 201