Massive Fire On 4 Coaches Of Patna-Mokama Passenger Train; No One Was Injured

Jan 11, 2018 Posted by Indian Railways Updates Indian Raliways News Comments Off on Massive Fire On 4 Coaches Of Patna-Mokama Passenger Train; No One Was Injured 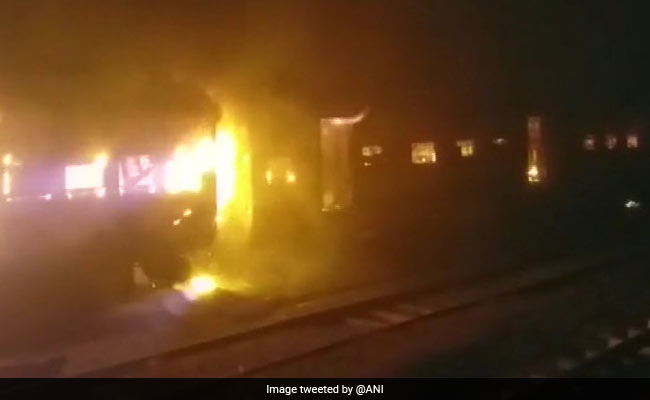 Flames engulfed four coaches of Patna-Mokama passenger train last night; no one was injured in the fire. The train was stationed at Mokama railway yard, 90 kilometers east of Patna, when fire was spotted in two coaches at 1 am, the Railways spokesperson said. He added that an attempt was made to extinguish the fire but unfortunately it spread to two more coaches resulting in four coaches being completely gutted. The spokesperson said fire did not affect railway operations in that sector. The Additional Divisional Railway Manager reached the spot to take stock of the situation. Railway officials said the reason behind the fire is being looked into.

Chairman of the Railway Board, Ashwani Lohani told Press Trust of India, that train accidents have come down by 40-45 per cent in the current financial year as compared to last year. Hoping that train mishaps would further decrease, Mr Lohani said prime focus this year was to address safety, maintenance and cleanliness of trains and railway premises. By June, 500 railway stations would get Wi-Fi facility as part of the Union government’s Digital India initiative. Railway Minister Piyush Goyal has set a target of track renewal for the current fiscal at 3,600 km, an 80 per cent jump over the average 2,000 km of tracks renewed by railways every financial year.