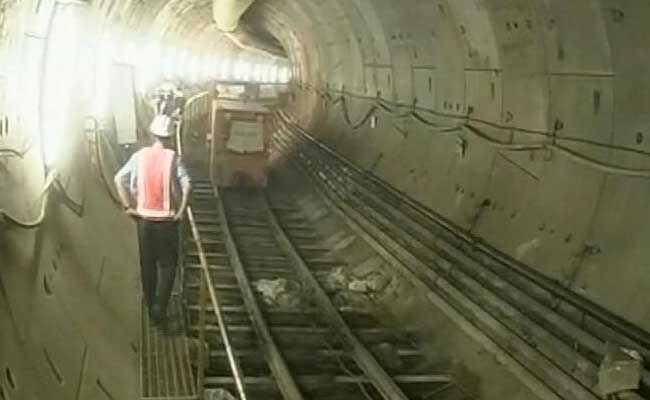 Kolkata will witness several changes in the traffic system in the heart of the city as construction of underground tunnels for the East West Metro railway begins this week in the bustling business zone.

One of the most important changes is the shutting down of the Brabourne Road flyover, which carries huge traffic round the clock from Howrah through Howrah bridge to the metropolis, for three days.

The critical construction of the underground corridor from the banks of River Hooghly towards Dalhousie in the heart of the city, through the highly congested Burrabazar area using a tunnel boring machine (TBM) would begin from the midnight of July seven.

“The TBM will start working from the river bank into the city on July six,” general manager (administration) of Kolkata Metro Railway Corporation Ltd (KMRCL) A K Nandy told PTI.

“Traffic on the flyover and underneath at Brabourne Road will be closed from July eight to July ten,” Mr Nandy said. “We have held talks with the city mayor and Kolkata Police for arrangements in this regard,” he added.

Traffic that passes through the flyover will be diverted to other roads like Strand Road and Mahatma Gandhi Road as well as the second Hooghly bridge, which is located a few kilometres away from Howrah bridge.

Burrabazar, through which Brabourne Road passes, is known as the trading hub of eastern India and is always choc-a-bloc with vehicles and pedestrians on working days.

Two major roadblocks in the construction of the tunnel in the Burrabazar area and Mahakaran station at Dalhousie were recently removed after KMRCL got the go-ahead from the Archeological Survey of India (ASI) and Calcutta High Court.

The ASI permitted KMRCL to lay the underground metro line and build Mahakaran station at the Dalhousie area, near the Currency Building and two synagogues, which are heritage structures.

Laying down the conditions for such construction, the National Monuments Authority said “all construction above the ground, including Mahakaran Metro station, shall be beyond the 100-metre prohibited area of Centrally Protected Monuments.”

The construction of the tunnel will require vacating two very old buildings, one each on Strand Road and Raja Woodmunt Street, on both sides of the flyover.

Some other buildings may also be vacated later as the TBM approaches the Dalhousie area through Brabourne Road, Mr Nandy said.

The high court had given the go-ahead to plans to temporarily shift the residents of these buildings during construction of the tunnel.

“We have made arrangements for the stay of the residents of these two buildings in a hotel and we will also provide food to them,” Mr Nandy said.

AFCONS, which is carrying out the construction work of the tunnel, had moved the high court seeking relief over delay owing to the issues related to occupiers who are not evacuating some old buildings in the Burrabazar area and permission for construction near or under the three heritage buildings in the Dalhousie area.

A decades-old minibus stand in front of former state secretariat Writers’ Buidling, from where 16 routes to different parts of the city originated, will be dismantled, with the work starting on Wednesday.

“These buses will now do a round about of the Dalhousie area and move out after passengers alight and board,” city Mayor Sovan Chatterjee said.

Several tram routes, which travelled to and from Dalhousie area, the city’s oldest office district, will also be suspended for three years during which construction of the tunnels and Mahakaran station will be done.