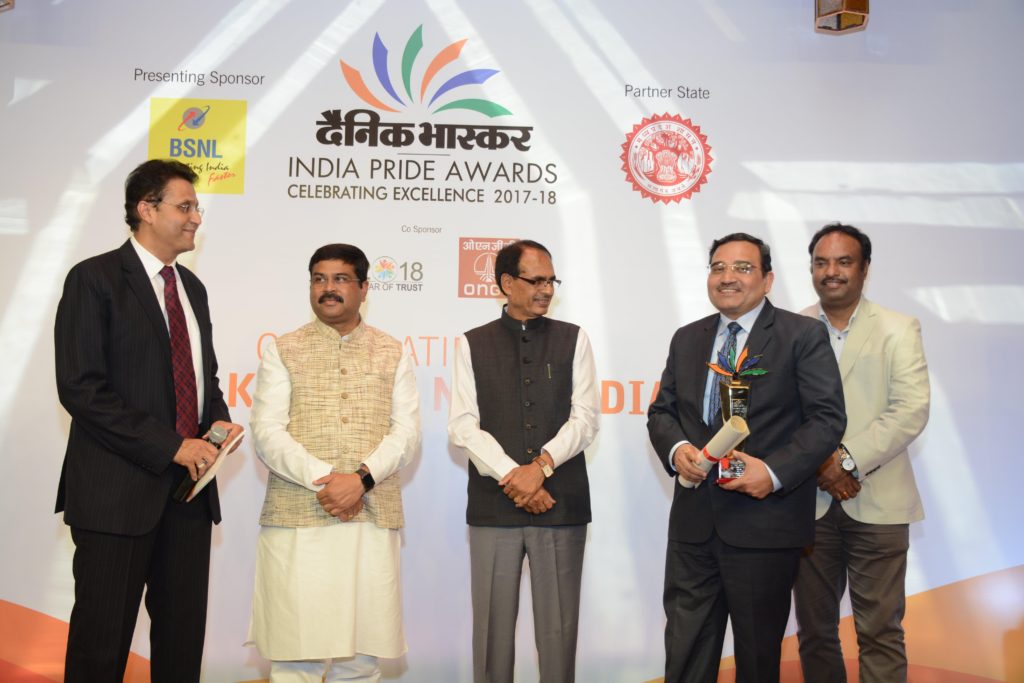 IRCON International Limited, the leading construction PSU has been awarded the prestigious ‘India Pride Award 2017-18’ in Excellence in Miniratna-1 category on 28th March 2018 at New Delhi. The award was received by Sh. S. K. Chaudhary, Chairman & Managing Director, IRCON from Sh. Shivraj Singh Chouhan, Chief Minister of Madhya Pradesh and Sh. Dharmendra Pradhan, Minister for Petroleum & Natural Gas and Minister of Skill Development & Entrepreneurship. The award was instituted by the Dainik Bhaskar Group in 2009 to honor the PSUs in their areas of excellence.

IRCON International Limited, formerly Indian Railway Construction Company Limited (IRCON), is an engineering and construction, specialized in transport infrastructure. The PSU was established in 1976, by the Government of India under The Comp. Act, 1956. IRCON was registered as the ” INDIAN RAILWAY CONSTRUCTION INTERNATIONAL ltd, a wholly(100%) owned entity of the Ministry of Railways. Its primary charter was the construction of railway projects in India and abroad. IRCON has since diversified into other transport and infrastructure segments and with its expanded scope of operations around the world, the name was changed to Indian Railway International Ltd in October 1995.

The core competence of the company in order of priority are – Railways, Highways and EHT Substation Engineering and Construction. Ircon is a turnkey construction company that is specialized in railways (new railway lines, rehabilitation/conversion of existing lines, station buildings and facilities, bridges, tunnels, signalling and tele-communication, railway electrification, and wet leasing of locomotives), highways, EHV sub-station (engineering, procurement and construction) and metro rail.