Among many major renovation works that were conducted during the lockdown period, the national transporter has successfully completed the rehabilitation of a Brick Arch bridge in a record time of 36 hours. 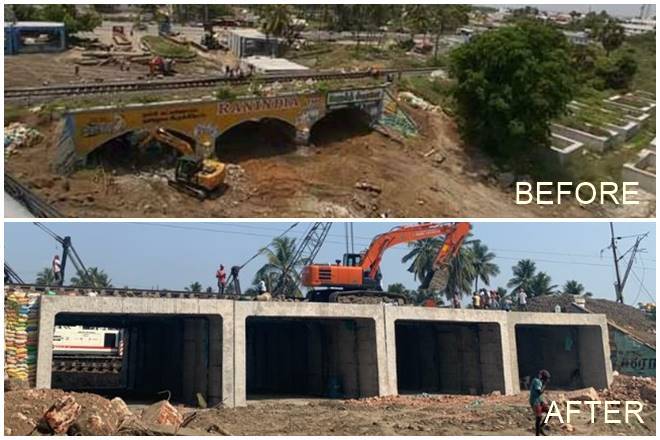 Indian Railways renovates a century-old railway bridge in record time! Despite the country still under lockdown due to the COVID-19 outbreak, Indian Railways is utilizing this time to complete its repair and maintenance work. Among many major renovation works that were conducted during the lockdown period, the national transporter has successfully completed the rehabilitation of a Brick Arch bridge in a record time of 36 hours. This bridge was originally built in 1862. According to details shared by the Southern Railway Zone, the century-old railway bridge is located at Km 384/900-384/000 on downline between Anangur – Caveri railway stations (near Erode). The existing railway bridge, which falls under Salem Division, is of Brick Arch consisting of three spans of 9.15 metres.

According to Southern Railways, the existing railway bridge was proposed to be replaced with RCC segmental boxes comprising four spans of 6.6 metres wide. Initially, the rehabilitation work was planned to be carried out with two temporary girders of 60 feet with crib support in the centre.

However, keeping in view the operation of less train services during this nationwide lockdown period due to the novel coronavirus pandemic, the national transporter decided to rebuild directly without temporary girder for a continuous 36 hours block. The rebuilding work of the railway bridge was taken up at 8.00 AM on 4 May 2020 and the work completed at 5.00 PM on 5 May 2020. During this period, all the train services dealt on the single line between 3 stations i.e. Sankaridurg to Erode, the zone stated.

Recently, the Railway Ministry issued a statement saying that during this lockdown period when all passenger train services are cancelled due to COVID-19, several long-pending repair and maintenance works like Yard remodeling, renewal of scissors crossover, repairs of bridges, rail tracks have been carried out by Indian Railways. Besides, many pre-monsoon works have also been conducted to prevent the disruption of train services during the rainy season.