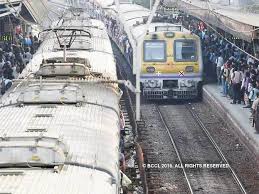 The railway ministry will soon send a proposal to the cabinet seeking its nod for a Rs 60,000-crore programme to modernise Indian Railways’ signalling system, which will allow trains to run at a gap of 7-8 minutes, a senior government official said.

“We are revamping the signalling completely,” the official told.

The railways will upgrade the entire capacity in the country over five years. It will spend Rs 20,000 crore in the first year, he said.

Indian Railways is also working on a plan to electrify more than 30,000 km of rail lines in next five years to have 100% electrified network. Under the plan, railways will phase out diesel engines in five years, which will help it cut its Rs 26,500 crore annual fuel bill by Rs 10,500 crore, the official said.

Railways has a 64,000 km long network, of which a little less than half is electrified. “Electrification revamp would be done through a special purpose vehicle (SPV),” the official said.

“Golden quadrilateral would be prioritised and then its lateral corridors may be taken up. This proposal would be taken to cabinet soon for approval. SPV would be formed by public sector entities. It could be structured like Real Estate Investment Trust (REIT),” he said.

Railways has also decided to offer 99-year-long lease to contractors willing to invest in station and rail land redevelopment programme, to make the scheme more attractive, the official said.

The earlier scheme that offered 45-year lease for commercial exploitation of the railway station land, but it did not find many takers.

“We discussed with the industry as to what were the issues. They raised issue about lease being restricted to 45 years, which they felt was very short. They also raised issue about no provision for mortgage or resale,” the official said.

“We have now reworked it. It will have a 99 year lease and allow mortgage,” he said. Indian Railways has lined up 400 stations for redevelopment.