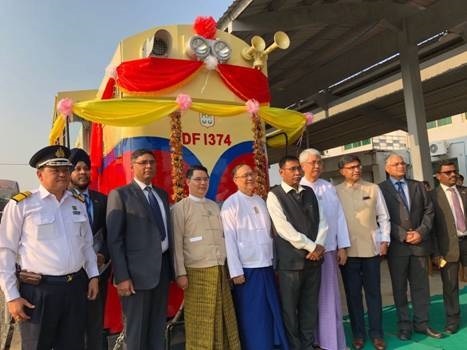 As per vision of Prime Minister Shri Narendra Modi, Indian Railways is playing a pivotal role in developing cordial relations with the neighboring countries. India and Myanmar have been long enjoying cooperation in the Railway sector over the last two decades.

These 18 locomotives are fitted with micro-processor control based system. 1350 HP AC/DC main line diesel locomotives with maximum speed of 100 KM PH have been customised for Myanma Railways, built by Diesel Locomotive Works, Varanasi, India. They are extremely fuel efficient are eqquipped with the latest features. Most of these supplies in the railway sector have been carried out under Indian Line of Credit. As per the agreement schedule, all locomotives were to be delivered by September, 2018. They have been delivered six months ahead of the schedule.

Speaking on the occasion, Shri Rajen Gohain, Minister of State of Railways expressed his pleasure on the close cooperation between the two railway systems on regular basis since last 20 years. He congratulated Indian Railways in completing the project, much ahead of delivery schedule and providing locomotives with many contemporary new features over the earlier supplies. He thanked the Indian Embassy in Myanmar for their full coordination and assistance with the Myanmar authorities in easy facilitation of the project. The Minister said that this association will help strengthen friendly border relations with India.

On the occasion, HE U.Thant Sin Moung, Minister of Transportation and Communication mentioned the valued cordial relationship between the two countries and how it can go beyond the present interaction. He showed keen interest in the training programmes offered by the Indian Railways and on the Signaling and Telecommunication systems.

RITES, a Public Sector Enterprise under the Ministry of Railways is the export arm of the railways undertaking various projects worldwide. RITES has engaged in the supply of Railway rolling stock (locomotives, coaches, wagons, permanent way maintenance vehicles), maintenance of railway infrastructure, technical studies, training of Myanmar Railway officials. Soon, RITES would take up the study for upgradation & maintenance of workshops. A team of experts from Diesel Modernization Works, Patiala would visit Myanmar soon.