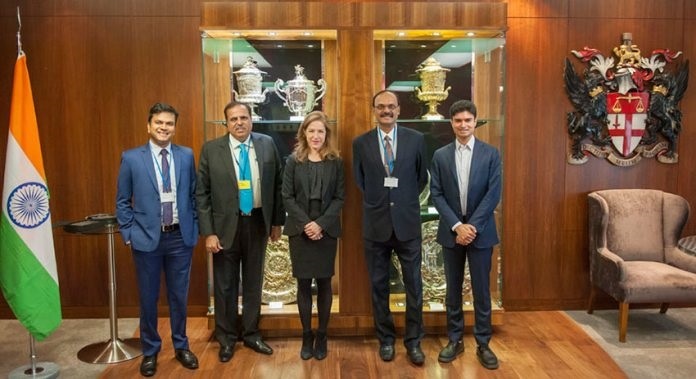 The Indian Railways’ financing arm today listed its first green bond on the London Stock Exchange with an aim to finance infrastructure for dedicated freight corridors and passenger transport in India.

Indian Railway Finance Corporation (IRFC) was set up in 1986 as the dedicated financing arm of the Indian Railways for mobilising funds from domestic and overseas Capital Markets.

The 10-year dated green bond raised $500 million with an annual yield of 3.835 per cent as it listed on the London Stock Exchange (LSE)’s new International Securities Market (ISM).

The bond, the proceeds of which are aimed at financing or refinancing infrastructure for dedicated freight railway lines and public passenger transport in India, was more than three times oversubscribed as it received strong international investor support.

“We are very delighted on the successful launch and completion of this transaction which establishes IRFC’s status as one of the most sought-after Indian state-owned enterprises credit in the international bond markets. This was IRFC’s return to the international bond markets since February 2014, so investors were very keen to gain exposure to a rare high quality credit from India. The issue has been oversubscribed by 3x times and managed to achieve a very strong price compression. The successful completion of the deal underscores investor’s confidence in IRFC,” said S.K.Pattanayak, Managing Director, IRFC.

“Our debut green bond is a significant milestone for IRFC, supporting the company’s ambitious infrastructure green projects which includes procurement of rolling stocks for electrifying rail tracks across India,” said S K Pattanayak, the IRFC Managing Director. “Not only was the bond three times oversubscribed but today we have also achieved our aim, through London, to increase our investor base across the EMEA (Europe, the Middle East and Africa),” he added.

The IRFC listing marks the sixth green bond transaction on LSE by an Indian issuer and fourth on the new ISM.

Sean Kidney, CEO of the Climate Bonds Initiative, said: “Indian Railways is the third state-backed entity to seek global exposure by issuing a certified green bond and listing in London.

“This IRFC green bond and the previous issuance from the IREDA (Indian Renewable Energy Development Agency) and the PFC (Power Finance Corporation) are a sign of the enormous market opportunities for international investors in green energy, transport and infrastructure to meet India’s intertwined climate, energy and development goals”.

The LSE said the latest bond listing demonstrates Prime Minister Narendra Modi’s 2015 commitment to funding India’s infrastructure and growth through the issuance of over 1 billion pound worth of Masala bonds.

“Today’s green bond listing is a significant milestone for India and the IRFC, allowing the country to further tap a dynamic new international channel of finance for Indian infrastructure,” said CEO of the London Stock Exchange plc Nikhil Rathi, who described Indian Railways as the “heartbeat of the Indian economy”.

“It also re-enforces the progress being made in the Energy for Growth partnership established in April between the UK and India, strengthening London’s position as India’s closest and most valued funding partner.

“There is an undeniable shift in momentum in the green and sustainable financing across the globe. The London Stock Exchange Group is at the forefront of this green financing movement, developing innovative products and services in partnership with our customers,” Rathi said.

The London Stock Exchange Group said it has been supporting investors and issuers in the transition to a low- carbon and sustainable economy for over a decade, developing innovative products and services in close collaboration with the market.

To date in 2017, there has been 64 per cent growth in the number of green bonds listed on the LSE compared to 2016 and a 65 per cent increase in money raised.

In total, there are 61 green bonds listed in London that have raised over $20 billion in aggregate terms across seven currencies.

“The launch of the deal at initial price of UST + 165ps area and a final pricing at UST +145bps reflected the strength of the orderbook and saw investment interest coming from high quality investors in Asia, Europe and Middle East, and offshore US. The successful transaction followed an extensive road show in Singapore, Hong Kong and London. At UST +145bps, this represents the tightest 10-year spread paid by an Indian public sector corporate in the last decade in the USD markets. ”

Setup in 1986, IRFC is wholly owned by the Government of India. It is under the administrative control of Ministry of Railways (MOR) and plays a critical role in the Indian government’s plans and policies given its exclusive role as financier to MOR.