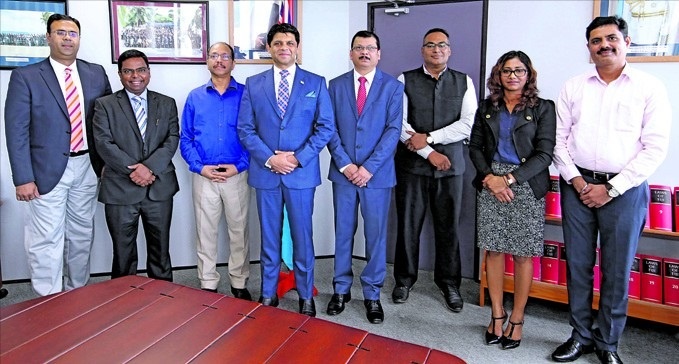 A team of Indian Railway experts has arrived in Fiji to undertake an assessment of the Fijian railway network and recommend a plan of action for upgrading the network to accommodate greater freight and passenger travel.

The team was dispatched to Fiji by the Ministry of Railways, Government of India following a meeting between Attorney-General Aiyaz Sayed-Khaiyum and the Indian Minister for Railways, Piyush Goyal, during the World Sustainable Development Summit held in New Delhi, India last month.

The technical team has already made a site visit on Tuesday to the Rarawai Sugar Mill in Ba and will continue site visitations throughout the Western Division during the week.

Mr Sayed-Khaiyum welcomed the expert team to Fiji at a meeting yesterday in Suva where he stressed the enormous benefits of upgrading railway infrastructure in Fiji.

“Upgrading our railways systems to accommodate greater freight will have an immediate impact for our farmers, including our cane farmers, who will be able to cart more cane, reduce their cartage costs and increase their profit margins.

“And the introduction of passenger travel will open up Fiji in new ways that will benefit tourism, agriculture, transportation and many other sectors of our growing economy.   “We are very keen to partner with the Indian Government on this project and look forward to receiving the full recommendation from the technical team following the completion of their assessment,” said the officials.

The fact that Indian experts are coming to Fiji to do a study on how to can connect the nation’s towns and cities with railways is a huge step in the right direction. It is a huge step towards modernising Fiji, a huge step in bringing Fiji up to par with country’s more developed neighbours –  Australia and New Zealand.

Fiji has always led the charge among countries in the Pacific and if we are to lead the charge in setting up our railways for passengers and for cargo it will change the face of our country.

Attorney-General Aiyaz Sayed-Khaiyum, during his meeting with the India Minister for Railways Piyush Goyal, said using an upgraded rail system for passengers and cargo would greatly relieve pressure on Fijian roads. It is indeed fundamental to the long-term sustainable development of the country.

Achieving something of this magnitude has no doubt required a lot of negotiation and Mr Sayed-Khaiyum is just the man for it.

His foresight that Fiji needs a railway system in place will benefit Fijians not only today but also for generations to come.

Some of the areas in which we will no doubt make the most of the railway system is tourism, daily travels and transporting cargo.

Tourists getting off at Nadi International Airport will be able to travel easily throughout the country. That will mean the tourism dollar will be spent in more places rather than being confined to one or two towns.

Imagine being able to transport vegetables from Sigatoka to Suva in a matter of less than an hour. Not only will the cost of transportation decrease for farmers but that decrease in price will be passed onto Fijians every day.

Imagine not being stuck in traffic every single morning. Travel from Suva to Nausori could be a journey of less than 15 minutes. The same can be expected for travel time between Nadi and Lautoka.

This is a win-win situation for Fiji and we have the right man leading the charge on this front.